Written by Marc Lottering, and directed by Lara Foot, AUNTY MERLE THE MUSICAL has received no fewer than 4 Fleur Du Cap Theatre Nominations. The hit show has already enjoyed 2 sell-out seasons, and is back by public demand.

The role of Aunty Merle is played by Marc Lottering. AUNTY MERLE THE MUSICAL boasts 14 actors and a live band. High Drama unfolds in Belgravia Road, Athlone, when Merle’s daughter Abigail (Tracey-Lee Oliver) announces her engagement to her Bantry Bay boyfriend Alan (Paul Du Toit). As Merle puts it: “he’s a good-looking white chap!” But it’s never smooth sailing in the world of Musicals. Abigail’s twisted and corrupt ex, Denver Paulse, (Loukmaan Adams), who holds a dodgy top job with the SABC, is determined to get her back. If not, he threatens to reveal a very dark secret which is bound to tear the lovers apart. 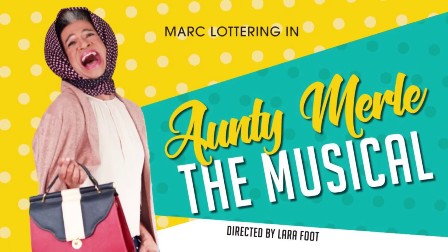