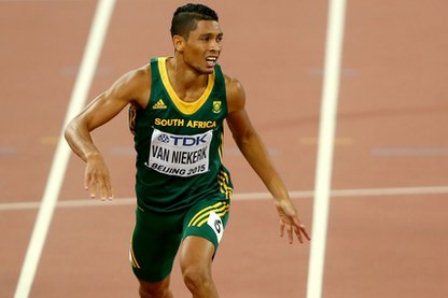 From Kraaifontein on the Northern outskirts of the Cape Flats, Wayde van Niekerk who was born on 15 July 1992, is taking international athletics by storm.

Wayde made his international debut at the 2010 World Junior Championships in Athletics, where he placed fourth in the 200 m with a personal best time of 21.02 seconds.
After winning the Senior 200m title of the South African Athletics Championships in 2011 Wayde started showing talent in the 400m event in 2012 winning his second national title in 2013 competing in his new preferred distance.
He then went on to compete in various international competitions over that distance in 2014 chalking up great successes.

Wayde was born to sporting parents and his mother Odessa Swarts was a junior as well as senior provincial sprint champion in the Apartheid era who sacrificed the possibility of competing internationally by remaining in the country and continuing to support the South African Council on Sport (SACOS) call for isolation and the international boycott of Apartheid sport.

Today, 26 August 2015, Wayde van Niekerk won gold in the 400 meters to become the fourth fastest person in history and the fastest non-American over that distance with a personal best time of 43.48 seconds at the 2015 IAAF World Championships in Beijing, setting a new African and new SA Record, beating his previous (his 2nd) SA record of 44.24 seconds he set at the at the New York Diamond League race in June 2015.

After his record-breaking race Wayde had to be hospitalised for observation suffering from severe exhaustion but we are happy to report that he was discharged in good health two hours later.
We at bruinou.com congratulate you Wayde van Niekerk and we believe that you are well on your way to becoming a world record holder.