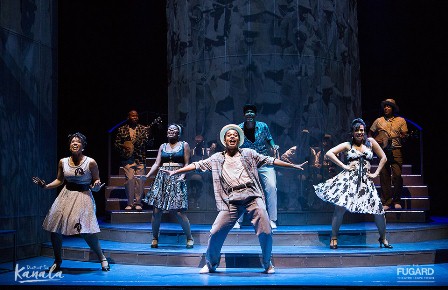 Audiences will naturally want to draw comparisons between the original District Six: The Musical and District Six Kanala.
I suggest that you leave all your pre-conceived notions at the theatre entrance.
District Six Kanala is Different. It is not better or poorer. Though many of the songs are re-arrangements of songs from the original musical, conceptually it is a brand new show.
Kanala, for those of you not in the know, is an Indo/Malay word used among a cross-section of Capetonians but more so by the Musilm community. It is a plea or invocation meant to be somewhat stronger than simply saying 'please'.

Standing in front of the Fugard in Caledon Street situated right next door to the District Six Museum Homecoming Centre, and looking far up the street to where there are still some empty patches of land where once there was the vibrant District Six, evokes a range of emotions that one invariably carries with you to your theatre seat.
I was fortunate to be seated between my friend Kenni Gambo who was born in District Six and Noor Ebrahim, a former resident who works at the Museum and who published a book in 1999 describing his life in District Six. They both proved to be amazing sources of first-hand information on life in The District.

The combination of the small set consisting of side panels as well as the "revolving half-tower" which sits between two staircases all serving as projection screens depicting background scenery made up of old District Six photographs (some of which were in fact supplied by Noor Ebrahim) as well as film footage and animation, lighting, high tech audio and visual effects, places District Six Kanala squarely in the digital age of theatre production.
The half-tower revolves around a stage seating the band and cleverly hides or un-hides them in different scenes. 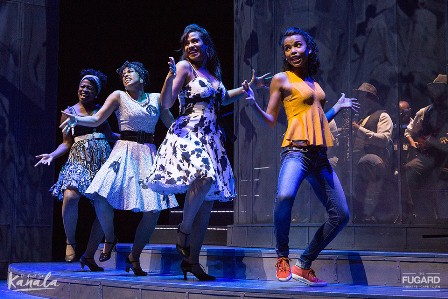 Kanala starts off in the present day around the flights of fantasy of a teenaged Bonteheuwel girl as she pages through the photo album her grandmother had left her.
She takes us along on her fantasy journey of what life in The District was like. Her character in her modern clothes relives all of those photo moments as if she is embedded in almost every scene.The premise is that the rest of the cast is completely unaware of her presence even though she sings along and dances with them.

The role played by Andrea Frankson seems quite demanding as she is both narrator and a participant in almost every musical and dance scene. Though she is not touted as the lead character, Andrea's ability to portray what in my mind is essentially the role which holds all of the other scenes together, is testimony to all of her accomplishments as a professional actress in a very short span of merely three years. She made her professional debut in 2013 on the David Kramer production Blood Brothers performing alongside her current fellow cast members Carlo Daniels, Bianca Le grange and the multi-talented singer Edith Plaatjies, who aside from an equally short but impressive theatre career, has a solid footing in the music industry, having worked with top international artists such as Diana Ross and Josh Groban and having released her first solo  album, 'Wicked', as far back as 2010.

In the short conversation I had with Andrea after the show, it was almost infectious how elated she was at having landed this role. The University of Stellenbosch Drama graduate says that it is an honour to be part of a production that keeps the memories alive. Growing up she had only ever heard stories about The District and had never thought that she would also one day be part of sharing such an intimate connection with its history.
Her recent professional stints as a presenter on both SABC TV as well as Kyknet makes her perfectly cast to play the embedded narrator. 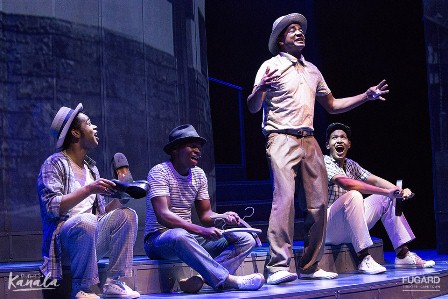 This is not to say that the rest of the cast was any less brilliant.
The highly talented and celebrated Loukmaan Adams is a veteran of the original District Six Musical as well as the West End hit Kat and The Kings, among many other theatre productions. His performance commands you to notice his abundant experience which the other cast members seem to feed off. Cast as a lead, his role does not seem that much more significant or meatier than any of the others, but his stage presence creates an aura that automatically makes him the leader of the pack.

Singing sensation and 2002 Idols runner-up, Bianca Le Grange, also no stranger to the theatre stage, plays the adolescent version of the grandmother and she does it convincingly well. As the other lead role, her character does not significantly overshadow any of the other roles either.
This is not a bad thing at all. The seemingly understated leads are probably what adds to the rollicking pace without bogging the audience down to a conventional plot which requires one to either 'get it' or not. The idea, it seems, is rather more a case of whether you can feel it or not.

Cast members all playing multiple roles and the noticeably quick costume changes make for many seamless scene changes with the actors flawlessly taking on the personas of their next characters.
Edith Plaatjies, Natasha Hess, Cleo Ratus, Sne Dladla and Carlo Daniels were not just merely cast as supporting roles but they each add their own flavours to creating a heady mix of emotions as we are taken on a rollercoaster ride from the happy celebration of a lifestyle that no longer exists, to the sadness, even anger, at how that lifestyle was ripped from the heart of the District, and to hilariously brilliant comedic depictions of that lifestyle.

Of the many highlights was the combination of choral harmonic delivery and comedic timing in the side-splitting "Malay Choir Practice" scene led by Loukmaan Admans.
It was however Sne Dladla who showed why he has won a string of awards as both a comedian and a serious actor and along with his abilities as a voice-over artist, his versatility made him an absolute delight to watch.

It was a delightful little surprise when, as an obvious nod back to the scene of My Broertjie My Bra in the original D6 musical, where way back then Soli Philander's character sang about the hardships of a little nine year old boy, a very similar-looking young scraggy little boy played by Andrea Frankson comes on stage to sing in a 'talent competition' that he did not really care to be entered into.

The music, the arrangements and the song choices for each actor as well as the different vocal ensembles are nothing less than brilliant. Musical Director Alistair Izobel had outdone himself and I will dare to say that the late great Taliep Petersen would in all likelihood be proud. 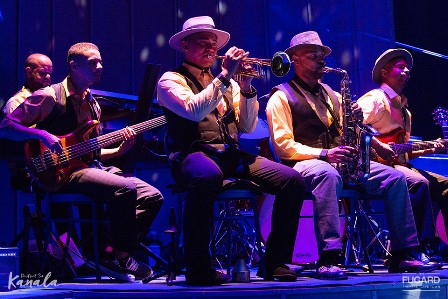 The band also shows world-class form. With its higly rated musicians Lorenzo Blignaut, Anthon Mannel, Dylan Roman, Angelo Syster and Craig van Willingh under the leadership of Donveno Prins, himself a musical director in his own right and currently hailed as one of the most sought after saxophonists in the country, I for one expected nothing less.

After the show I had a chance to catch up with Donveno who immediately made sure I know that he is still regularly on the bruinou.com website catching up with our latest news. Knowing that he was born in Elsies River, I asked him if there was any personal connection he felt to District Six.
"My grandmother spent a large part of her life living in District Six but that did not really have much of an impact on me."
"It was only when I started working with David Kramer on the Taliep Petersen Songbook tribute project that I started realising that there is something of District Six in each of us and learning the stories behind the music is what opened it up for me."

District Six Kanala serves our need for nostalgia and a sense of history, but it is ultimately also meant to be great entertainment.
The show is currently running at The Fugard Theatre until 5 March 2016.
Do yourself a favour Kanala... Go watch it.

UPDATE!
The show has been extended and will run until 3 July 2016