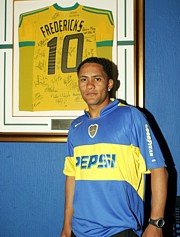 One of the current most underrated players in my book is Stanton “Stiga” Fredericks. Stiga was a member of the Ama-glug glug team (South Africa under 23) that recorded an emphatic 3-1 victory at the Olympics over a Brazil team that included the great Ronaldinho. Stiga had many great years of Chiefs before moving to Moscow where he excelled initially before falling out of favour with the new coach. He was given a raw deal after moving back to SA, having many doors shut in his face…no way to treat a player of his caliber in my book.

Stiga has been given a new lease on life by Greek B division outfit Pierikos. He has signed a one year contract that expires at the end of December and has vowed to capitalize on the opportunity. Stige is just 29 and has a couple more years of top flight football in him. I have no doubts that he will resuscitate his career in Greece and I will even go further to say that Carlos Parreira will notice him for Afcon 2010 and the World Cup that we will be hosting a few months later in that year.

Bruinou.com would like to wish Stiga all of the best with his new career and are confident that he will prove his critics wrong. Stiga was a huge supporter of Bruinou.com and would often show his support at events that were held out of season.

I am sure that fellow South African and Bruinou.com supporter Nasief Morris who has made Greece his home for the past few years will help make his stay a lot more comfortable.

Best of luck Stiga and make us proud.

0 0
Published in Sports News
More in this category: « New SA coach is a Bruinou Congratulations Bokke! (Welcome Home!!) »
back to top