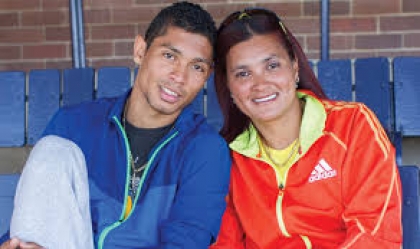 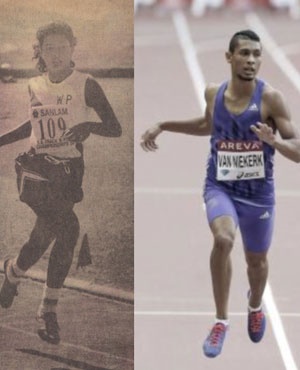 Wayde's mother Odessa Swarts (née Krause) was a junior as well as senior provincial sprint champion in the Apartheid era who sacrificed the possibility of competing internationally by remaining in the country and continuing to support the South African Council on Sport (SACOS) call for isolation and the international boycott of Apartheid sport. Wayde's father, Wayne van Niekerk, was a high jumper at high school.


Odessa''s brilliant career started at Ned Doman High School in Athlone. She completed her schooling at Scottsville High in Kraaifontein, Cape Town.
During sports isolation, Odessa set Athlone Stadium on fire with her performances in the 100m and 200m. She blazed to provincial records in both the 100m and 200m on the grass track - against Cape Town's infamous South Easter.


Following her top-notch performances at the inter-schools and champ of champs meetings, Odessa ran through the Western Province (WP) schools team, clubs and South African (SA) schools and clubs, mercilessly setting records in the 100m and 200m. Only the elements and the record books were her rivals - an absolutely dominant sprinter.


By the time Odessa quit athletics, and South Africa entered democracy, she held more than six sprint records spread across high schools and clubs at both provincial and national levels.


WATCH: A Mother's love - An Interview with Odessa Swart on Youtube
Click the link above if the Video Pplayer is not yet open in your browser.