He adds: “I stuck out like a sore thumb. I have never looked at the world the same way again. At the end of the day, I am a lot more than just a coloured person. But before I am anything, I am coloured.”
At the age of 21, Ash decided that coloured people needed a place where they could experience a sense of community. “There was a hunger for a medium where coloured people could thrash out the unique issues we face, such as identity, drugs, gangsterism and lagging entrepreneurship. This is a community in transition; in a country that is in transition.”

He convinced his boss (at the time) to register a web domain for him. And so, the “first website dedicated solely to coloured people” (www.Bruinou.com) was born. “The next step was marketing the site. I printed my own pamphlets and stood outside (night) clubs handing them out. I started writing about my life and my experiences in a regular column entitled ‘The Soap Box’ (later to become known as "The Brainow Nation"). This way the site slowly gained momentum for being controversial and forthright. Within six months of launching the site, it had 1,200 subscribers.”

Ash spent all of his spare time on the site. He would arrive at work at 6am to upload files, write articles and send out his newsletters, before starting his full-time job as a systems administrator at the Cape Town city council. Despite attracting a subscriber base of 32,000, the website does not sustain itself. Ash calls it an “out-of-pocket experience”: He continues to fund the site, while he struggles to find an investor. “I think people are scared to align themselves with something that is so blatantly racial.”

This self-proclaimed “ideas man” has embarked on various IT projects. In 2003, Ash entered the Enterprize business plan competition, where he reached the top ten in South Africa. “In 2005, myself and three of my business partners left our formal employment, to set up our own business in a garage. Psinetic New Media Solutions, a digital advertising agency aimed at the youth, was closed after two years.” Still, Ash continued to look for “the next big thing. I relied a lot on web research; I taught myself as much as I could about the industry. I soon realised that SMS was the new buzz in Europe and the US. So I decided to come out with a new service that no one had.”

He then launched two products: a WAP-based business directory and search engine, Mobilepages.co.za, and Blackpages.co.za, a business directory targeting black people. By 2007 the company had run out of funds. “I think that I had great ideas, but my timing was off. We launched those products at a time before people knew how to set up WAP on their phones. Not long after, MXit took the country by storm. I am still resentful that it achieved success where I had failed.” Eighteen months ago, after trying “absolutely everything in online strategy”, Ash decided to give it another bash. He relaunched The Hosting Company, this time focusing on webdesign and web-hosting. “I would say the company is doing okay; it is sustaining itself.” 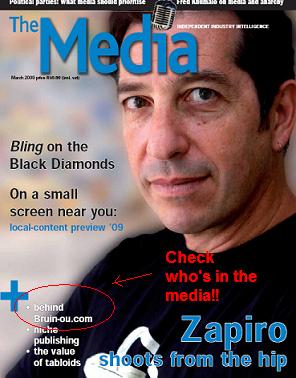 Around the same time, Ash called a meeting with various coloured people for feedback on Bruinou.com. It was here that he met reverend Ronald Dyers and they started talking about coloured people and the public broadcaster. “People often have a eureka moment when they hear that the SABC does not have programmes that cater for coloured people. “As the public broadcaster, they have a very clear mandate, which states that they should cater to the needs of all South Africans. The SABC has clearly fallen short.” Ash admits that he is bitter. “I resent the insensitivity of the refusal of certain people to acknowledge the severity of the situation.”

A non-racial organisation, the South African Movement for Equality (SAME), was formed by Ash and Dyers in July 2007. It lobbies for technology for all and media representation for coloured people in the form of a state-owned national radio station and two hours a week of TV programming on SABC. “This is merely a group of people fighting for what is rightfully theirs. What the SABC has done for years can only be described as malignant oppression,” says Ash.
He adds: “All we are asking for is airtime that targets issues that coloured people face; for our stories to be told.” SAME has met with representatives of the SABC, including Gab Mampone, acting group CEO, and Charlotte Mampane, acting chief operating officer, who have conceded that this issue deserves attention. (Earlier, the SABC would not comment on the matter, save to confirm talks.) A steering committee is now being formed.

Ash has just begun a new chapter of his life – as editor of The Media’s sister website MarketingWeb. “I plan to make waves in the marketing industry,” he says about his appointment.

Published in In The News
More in this category: « Go Sasha! Hope springs eternal? Not in this town »