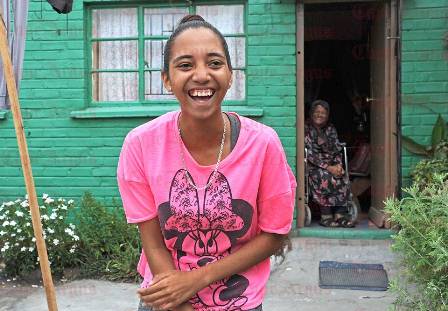 Manenberg High School matriculant Anushqah van der Ventel beat the odds by achieving six distinctions.
“I did not expect to get six distinctions,” the surprised girl said. “I still cannot believe that I did that well. All my hard work paid off.”
Van der Ventel, 18, said she burned the midnight oil and sacrificed her weekends for tutoring classes so that she could realise her dream of being a TV news anchor.

“There were times it was very difficult for me to study with the gang violence in my area. I would have to walk far to get to an internet café to complete assignments and could not when gangsters were shooting. I used to study at night. I would wake up at 10pm and study until 3am to avoid the noise,” she said.
Her mother, Jasmina van der Ventel, 51, said her father, who died three years ago, would have been proud of her accomplishments.

Van der Ventel will be studying journalism at Rhodes University. “I am worried about lack of funding. For residence and tuition it is R89 000. We have managed to get together half but if I do not pay the rest, I am worried I would not be able to finish my studies.”

Story: Gadeeja Abbas/ Picture: Tracey Adams
Read the full story in the Cape Argus of 7 January 2015 or get the app at www.myindependent.co.za