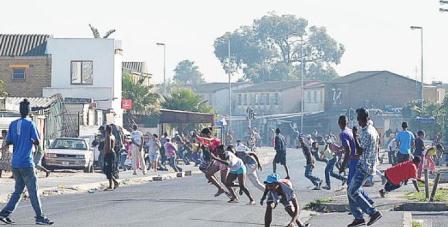 THERE have been running gun battles in Manenberg every day for the past week – which have left a number of people injured and there have been several unconfirmed deaths.

Yesterday morning, in the busy Pecos Walk, rival gangs fired at each other, residents dived for cover and the police were quickly on the scene.

While the guns were dropped, gangsters picked up rocks and bottles, which they hurled at each other and the police.


Residents say the sudden upsurge in violence followed the death of Leeroy Louw, 28, who was shot 11 times and died near his home in Rio Grande Lane on April 3.

Louw was allegedly a member of the Dixie Boys gang and had walked through Hard Livings territory.

His killing sparked the gang war which, according to Community Safety Forum chairperson Roegshanda Pascoe, has left a number of people dead. Police were unable to confirm the death toll.

Most of the shooting has taken place between Pecos Walk and Rio Grande Lane.

Residents said one of the gangs called in reinforcements from Hanover Park. They claimed the reinforcements were scouting the area and shooting indiscriminately, which had added to the fear. There had been sporadic shots fired, which became increasingly frequent, culminating in yesterday’s gun battle.

Manenberg has been reasonably quiet for months and residents say they were taken by surprise when the shooting started, and they were confounded by Louw’s killing, saying there had not been any tension between the gangs.

Click Here to Continue Reading the Original Article on IOL