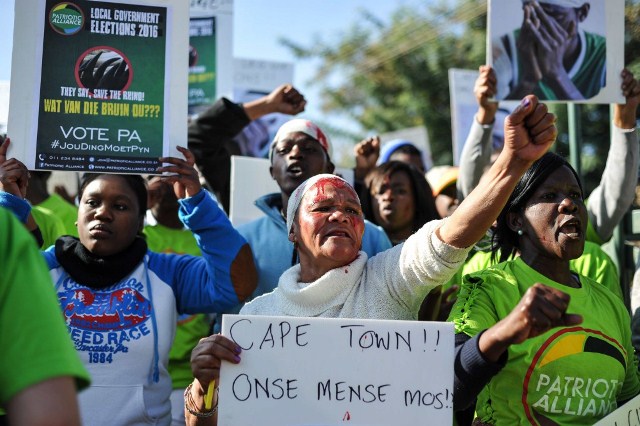 Members of the Patriotic Alliance (PA) on Wednesday 15 June stormed into the hall where Western Cape premier and former DA leader Helen Zille’s was addressing a meeting as part of her election blitz in Eersterust, Pretoria.

Outside the hall PA leader Gayton Mckenzie, who did not enter the hall during the disruptions, made reference to the DA having spent miilions on a new City of Cape Town logo but are not assisting families like in the case where eight children recently perished in a backyard dwelling fire in Michell's Plain.

He also condemned the DA's actions that left 32 Evicted Eerste River Mothers Destitute on a Rainy Mothers Day when they and their children wre removed from a woman's shelter in Eersterivier (WC) in the middle of winter..

DA mayoral candidate for the City of Tswhane Solly Msimang, who was also present, said the DA meeting had been disrupted because the PA was basing itself in predominantely coloured areas, such as Eersterust.

“They are trying to mobilise people on the basis of race,” said Msimang. He said the scourge of drugs was not going to end with other parties, because their leaders are “drug peddlers.” he told The Citizen.

Three DA councillors have defected to the PA since last week, including DA councillor Ingle Singh, who cited racism in the DA as one of the reasons he left the party.

McKenzie, the PA’s president, told reporters that he was very proud of what his supporters had done.

“I am standing 100% behind what these people have done here,” he said. “We are protesting. Protest is a legal form of showing your grievances. Helen Zille is coming here to say Cape Town is well run, but Coloured people are being murdered every day on the Cape Flats. What is she doing to prevent that? Nothing.”

Click Here to Read the Full Article in The Citizen