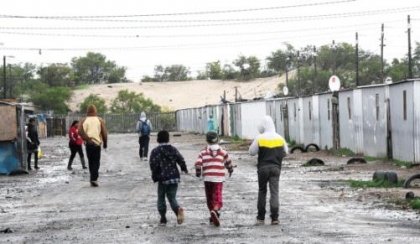 People are moved from already bad but manageable living conditions and placed in the much worse and downright horrible conditions of Blikkiesdorp and then they are forgotten about. Now their children are also being forgotten about.

Molo Songololo director Patric Solomons has told media that the organisation was aware of 43 children who needed local placements, but said their efforts to get the education department to intervene had proved fruitless.

A statement on the Molo Songolo Facebook Page expressed the frustrations the organisation's staff has to deal with in trying to get education authorities to address the issue.

"The RIGHT TO FREE QUALITY & EQUAL EDUCATION remains an ideal students, parents and child rights duty bearers should strive for. Commemorating 16 June 1976 is to recommit to these ideals.
Molo Songololo was approached by the community of Blikkiesdorp to help get their children to school.
Children dropped out due to poverty related conditions, lack of transport, and various barriers experienced (by parents) in trying to transfer and register their children... sent from pillar to post; as well as behavioural problems...
It is shocking to witness that various government duty bearers seemed unconcern that children are not in school... many blame parents and non is looking at their own attitudes, behaviour and systems that contribute to 'pushing' and 'keeping' children out of school.
Government officials need to be reminded that children have a right to education... that the rights of children are paramount... and children's best interests comes first.... and that they have a constitutional duty to ensure that children can enjoy their universal rights!"

Molo Songololo says the circumstances of each of the 43 children showed the children wanted to be in school, and were supported in this by their parents.

According to a Weekend Argus article, an unnamed official admitted to a shortage of classrooms in the area, but said “according to the brief I have, Blikkiesdorp will only be around until 2017”.
“We cannot build classrooms that will soon be without learners,” the official said.

We at Bruinou.com would like to know why more people are still being forcibly moved to Blikkiesdorp if the area will no longer exist as of 2017.

The Weekend Argus also contacted Education MEC Debbie Schafer’s spokeswoman, Jessica Shelver, for comment and she denied that there were children in Blikkiesdorp not attending school.
“Our district director has visited the area and could not find any children of school-going age that were out of school,” she said.

Shelver said the list of names they received contained no ID numbers or contact details.
“We are therefore unable to verify the names or contact the parents in this regard,” she said, urging affected parents to contact the district office.
Click Here to Read The Full Weekend Argus Article on IOL

The rights of the people who have been, for the lack of a better word, dumped in Blikkiesdorp are constantly being trampled on.
While there seems to be no solution in sight for the growing housing crisis in the Cape Peninsula, forcibly moving people out of rented property they can no longer afford due to factors that include gentrification, and placing them in a glorified squatter camp is not at all dissimilar to the Forced Removals of the Apartheid era Group Areas Act.