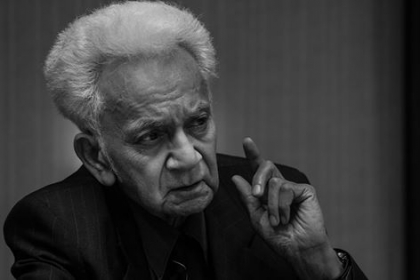 Tributes for the author of 12 books, among which his plays 'Kanna‚ hy kô hystoe', 'Krismis van Map Jacobs' and 'Joanie Galant-hulle' by most accounts are the best known, have been streaming in on social media throughout the day.

From former students to literary luminaries, to many ordinary members of the public, they all expressed their sadness about his passing but also expressed their gratitude for his contribution to society as well as the role he played in influencing a whole new generation of Afrikaaps authors, play-writers, poets, musicians and performance artists in a way that turned them into veritable cultural activists.

Adam Small was also well loved among many Akrikaaps Hip Hop artists as for some of them it was his literary work that helped spur them on in their notion that it is ideal to express yourself artistically in your own dialect..

As an academic‚ Adam Small educated many students, first as a philosophy lecturer and then as a professor of social work at the University of the Western Cape in Bellville.

For many years there was much controversy in Afrikaans literary circles because it was felt that Small did not get the recognition he deserved.

In 2009‚ the South African Academy for the Arts and Sciences awarded him a medal upon the celebration of its centenary‚ and in 2012 he won the biggest Afrikaans literary award of all‚ the Hertzog Prize.

Small became a lecturer in philosophy at the University of Fort Hare in 1959, and in 1960 he was one of the academic founders of the University of the Western Cape, when he was appointed Head of the Philosophy Department. In the early 1970s he joined the Black Consciousness movement.

In 1973 he was pressured to resign from the UWC, which prompted a move to Johannesburg, where he became the Head of Student Body Services at Wits University. He returned to Cape Town in 1977, where he was Director of the Western Cape Foundation for Community Services until 1983. In 1984 he returned to the UWC as the Head of the Social Services Department, a position he held until his retirement in 1997.

Adam Small is survived by his wife‚ Rosalie‚ and four children‚ two from a previous marriage.

Keep an eye on the Bruinou.com Facebook Page where we will post the funeral arrangements as soon as it is made public.