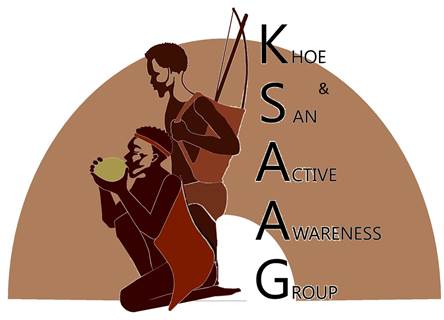 The Khoe & San Active Awarenes Group (KSAAG) is proud to announce that it is hosting the ǁGaras Vocal Ensemble from Keetmanshoop (Namibia) on 4 and 5 December in the historic venue of the Old Slave Church, 40 Long Street, Cape Town (ǁHui !Gaeb) at 7pm. The event is aptly called “A da !hoa tsî ǁnae Khoekhoegowab !nâ” (Let us talk and sing in Khoikhoi language) as the ensemble will perform a series of Nama choral (folk, secular,  traditional and gospel) songs. In addition the group will also present audiences with a cultural drama performance and, the very popular, “Namastap” dance routines. Not to be missed!

The event of the Friday, 4 December 2015, will also feature a host of local artists including the likes of Wilmot Fredericks, Amanda Stone, Jethrow Louw (Tanneman Gam), Neil Carelse (Dikwe X), Collin Meyer (Die Boesman), etc sharing the stage with the Namibians. Entrance fees for the evening will be R50 and minors are free. KSAAG is also hoping to attract the Nama traditional Leadership Association and other Namibian dignitaries to the Cape (ǁHui !Gaeb) in an effort to create cross-border incentives for the development of one of the oldest linguistic heritage, the Khoikhoi language. Owing to various dialects spoken in South Africa and Namibia, this linguistic gem is shared by both counties and through this initiative KSAAG aims to elevate the status and advance the use of this indigenous language of historically diminished status used by the people of the South Africa. Saturday 5 December promises to be the highlight of the Namibians performance schedule in the Mother City, where the ǁGaras group will enthrall audiences with their show called, “More than just music. The evening is tailored as a Gala Event with a 3 course meal and entrance is R150 for adults, R100 for pensioners and school children, and minors are free. KSAAG also aims to have an Award Certificate Ceremony at the event to recognize and acknowledge contributions made by individuals and groups, alike, for their continued efforts in advancing the plight of the Khoikhoi (Khoekhoe) and San (Boesman) Resurgence Movement in South Africa.

Khoikhoi (Khoekhoe) and San (Boesman) Customary Councils are warm heartedly invited to attend this events in their traditional attire and will be asked to sign a Pledge of Commitment for the safeguarding, promotion and creating conditions for the use of Khoekhoegowab (Khoikhoi language). Through their signatures, leaders will commit themselves in securing a 3-5 people per Customary Council to attend the 2016 Tita ge Khoekhoegowaba !hoasa ra ǁkhaǁkhasen (I am learning to speak the Khoikhoi language) programme as part of the Aba te (Carry me) Indigenous Legacy Initiative at the Castle of Good Hope.

These events culminates as a fundraiser and awareness plan for the 2016 incentive to put Khoekhoegowab on the linguistic landscape of the Western Cape, and the broader South Africa at large, and ultimately securing it as a official language of South Africa, like Namibia has done already. KSAAG welcomes everyone to join us in our right to revitalize, use, develop and transmit to future generations our own histories, languages, oral traditions, philosophies, writing systems and literatures, and to designate and retain our own names for communities, places and persons as spelled out by the United Nations Declaration on the Rights of Indigenous Peoples (Adopted By General Assembly Resolution 61/295 on 13 SeptemberEntertainment for the whole family and for people from all walks of life... 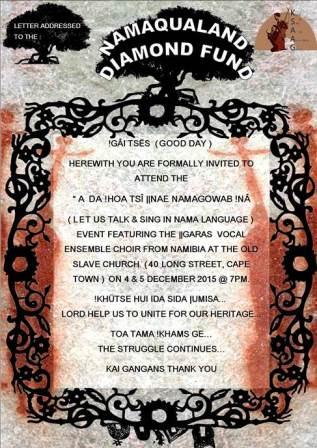 0 0
Published in Community News
More in this category: « RLabs Stories of Hope Festival a World First Metrorail Diaries »
back to top