Founded in 2008 by Marlon Parker who grew up in Silvertown, which is part of Athlone on the Cape Flats, RLabs is a global movement which has just recently hosted a world first Stories of Hope Festival (SoH) festival on the 11 and 12 December 2015.
This momentous occasion brought together 5000 community members from all walks of life, and they were inspired and united by stories of ordinary people living a life of 'making hope contagious'.

Reconstructed Living Lab (RLabs) is a registered Social Enterprise that provides innovative solutions to address various complex problems and serves as an environment for community driven innovation and reconstruction.
RLabs creates an environment where people are empowered to make a difference in the lives of others with their “main hub” in Athlone, Cape Town but they have activity in the United Kingdom, Europe, Asia, South America and Africa.

The inaugural SoH event was held at the Nantes Park in Athlone, the same community where RLabs was founded and expanded its work in 22 countries, across 5 continents.RLabs concluded the two day event with a celebration of 2000 graduates from across Cape Town who received certificates and recognition for their educational pursuit.
Their core activities are skills and training, community development, social and disruptive innovation, mobile and internet solutions, social enterprise incubation, impact investing and social franchising. Since inception, 7 years ago, they have trained 35 000 people through their training and development programmes. A study conducted by Ashoka Globalizer and McKinsey & Company, found that RLabs had created more than R330 million in economic value through their programmes.

RLabs will provide over 2000 free scholarships during 2016 to study at RLabs, and according to the RLabs Founder, Marlon Parker, there are two simple rules: smile and pay-it-forward.

The story of RLabs is one of “glocalisation”. A combination of  the words "globalization" and "localisation" which is used to describe a product or service that is developed and distributed globally, but is also fashioned to accommodate the user or consumer in a local market.


The SoH festival showcased local expressions of various art forms telling inspiring stories such as the Graffiti Art pieces "Building Hope Economies" and "Leader of Leaders" by local artist, Seth One.
There was also Canvass Art in the form of "The Hope Giver" by local canvass artist, Dion Cupido who has international superstars such as Beyonce acquiring work from him. 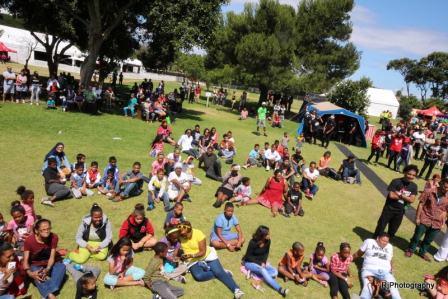 Furthermore, the SoH festival included the visual arts, cinematography, photography, literature and performing arts.
An art piece created by thousands of festival goers will be unveiled during next year.

For more info on how to get involved with RLabs either to support their activities or take advantage of the opportunities they provide, you can email them at This email address is being protected from spambots. You need JavaScript enabled to view it.
You can also Like the RLabs Facebook Page and you can visit their website rlabs.org or simply telephone them on (021) 699 1453.
Tweet

More in this category: « RLabs InnovIA applications are OPEN! A da !hoa tsî ǁnae Khoekhoegowab !nâ - Let us talk and sing in Khoikhoi language »
back to top