Coloureds should toyi-toyi at UCT 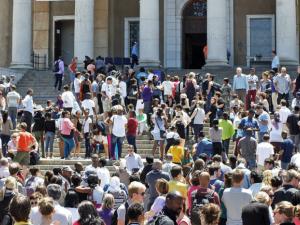 Coloured students are severely punished by the University of Cape Town’s new admission policy, writes Rambina Mahapa.
This article first appeared in Cape Argus 18 June 2014
Cape Town - It comes as no surprise that the new admission policy at UCT has been adopted. As a member of the UCT admission committee and Students Representative Council (SRC), I have seen UCT’s top management coerce various faculty boards and senate members into accepting the proposed policy. I found such behaviour quite distasteful.

The approach which the adopted policy uses to measure disadvantage is twofold. First, it looks at school disadvantage which is determined by ranking schools (poor-performing schools getting a maximum of 10 points and well-performing schools getting a minimum of 0 points) according to the average NSC score of all Grade 12s of a school over a rolling five-year period, combined with some quintile and historic school authority information.

Then what is coined “home disadvantage” is a combination of the language spoken by the applicant’s mother (of which Afrikaans is excluded), which is designated six points, dependence on social grants or pension (one point), education level of parents (one point each for your mother and father) and one point for education level of your grandparents.

Some well-resourced schools have emerged as disadvantaged (such as Bishops and Rondebosch Boys), which I found very problematic. Furthermore, a school like Mbilwi Secondary, which is located in the Vhembe district in rural Limpopo, which has been getting more than a 100-percent pass rate for more than 10 years, will be classified as “privileged” and will likely get zero points – despite the lack of resources and the location it finds itself in.

I urge people and statisticians to engage with the statistical methodology behind the disadvantage weighting; the methodology is flawed and lacks reliability. This is why, as student leaders, we have been saying that the policy should not be adopted as it stands.

The proposal was further tabled at the council by the SRC, and still the students were not listened to. We wonder what it is that management doesn’t want people to know.

Looking at the methodology, any black student has an automatic 6-10 points because language has a link with race. Coloured students are severely punished by the proposed policy because it does not include Afrikaans.

Including Afrikaans opens the door for privileged Afrikaner students to get in through the redress category. I have urged management to find a solution to this problem on a number of occasions, yet they remain deaf.

But what about those coloured students who went to good schools yet are socio-economically and psychologically disadvantaged? UCT is saying, sorry, you are “privileged”.

The race-based policy treated coloured and black students the same. If I were a coloured student, I would be toyi-toying in front of Dr Max Price’s office.

Any admission policy must treat coloured and black students alike. UCT has already met its redress targets for Indian and Chinese students, but lags behind dismally for black and coloured students.

Modelling for the proposed policy has only been done for two years, which means we are not certain if its results (although poor) will hold.

The management has been rushing the process, which has also resulted in a number of procedural and administrative errors. This renders the adoption of the policy invalid.

The vice-chancellor has said that the proposed policy will bring in more disadvantaged students, but this has not been proved and no data has been presented to support that assertion. Further, modelling of the changes in socio-economic diversity of the student body envisioned to be brought by this policy has not been done.

This, mind you, is the reason why the policy is being hailed. The effects of the proposed policy on the load of financial aid, student housing and academic development programmes has not been investigated at all.

The UCT management is basically saying to the university and the public: “Accept this broken car, it has no wheels and no engine, but we will fix it along the way. Just try to push it so long.”

The irony in the adoption of the proposed policy is that white proponents were saying, let us be non-racial, yet the majority of senate, which has more than 70 percent white people, and council members voted based on race.

A senate member stood up and said that he, along with most of the senators, did not understand the proposed policy, but still a motion to adopt it was tabled.

Regardless of whether you think race should be the proxy for disadvantage or not, I believe that any critical and honest person who engages with the model and methodology of calculating the disadvantaged weighting will attest to its being drastically flawed.

The day the council and senate adopted the proposed policy was saddening and it set a precedent. Talk has started in the corridors – a call for moving away from race with regards to the employment equity and UCT’s entrance scholarships has been made.

Why is UCT in such a rush to phase out race? I argue that post-1994, race has been associated with the government’s initiatives to accelerate development for previously disadvantaged people, yet this has resulted in a plot to move away from any racial identification.

Our management thinks that this move away from race will have their names written in the history books. Posterity will judge the 2014 leadership of UCT, and the judgment will be unpleasant.

The silence of Minister of Higher Education Blade Nzimande has also been disappointing. The gains made post-1994 are being reversed.

How does one remain quiet?

* Ramabina Mahapa is a member of the UCT admission committee and of the SRC.

** The views expressed here are not necessarily those of Independent Newspapers.
Click here to view the original IOL Cape Argus article.

Published in Opinions
More in this category: « Are you full of CRAP? Taking a slice out of the Lwande Evictions PIE »