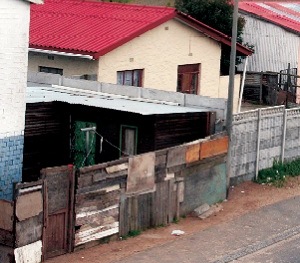 There are many reasons why backyard dwellers seem to be neglected by the system and even by some organisations that deal with the issue of housing. Back yard dwellings, though in some cases built similar to squatter camp shacks, also include Wendy houses, Nutec houses, as well as the granny flats and converted garages that are commonly called "servant's quarters" in some parts of the country. However, because they are almost always built behind the original house on the property, they are usually out of sight when viewed from the road and thus do not get the same attention of 'unsightly' squatter camps or informal settlements.

Many backyard dwellers (and squatters) who are on waiting lists for state supplied housing and in some cases they have been waiting for more than 20 years.
Backyard dwellers not only rent from private property owners but in many areas people who are themselves renting council owned houses sub-let backyard dwellings to people who otherwise would have nowhere else to go.

There is however a continued misconception that people who are on housing waiting lists and are unable to afford to buy property are simply too lazy and should work harder, that they lack drive, and that they are waiting on the state to give them a house because they have a sense of entitlement.
This misperception is reflected in the article comments one reads on news sites like News24 and IOL.
In an IOL article which deals with Macassar backyard dwellers protesting against the possibility that Lwande evictees would be prioritised on the Macassar housing waiting list, the readers posting comments do not even seem to realise the difference between what a backyard dweller and what a squatter is.
Backyard dwellers are by no means squatters but these two commenting seem to have the opinion that they are and that most squatters squat out of choice and anyone in that situation could simply save up and buy a house.

Fiona910
Got to wonder about these people... They've been on a housing list for 20 years? Why have they not done anything for themselves in all those 20 years of waiting? Too easy to stand with a hand out and wait for government to give them a house?

Liz Rudy replies to Fiona910
Fiona you took the words right out of my mouth. It is complete bullshit, in 20 years she and her family have done nothing to improve themselves? RDP/Free housing is supposed to be for people who earn less than R3500.00 per month collectively. Funny how many expensive cars you see parked at these "poor" people's houses.

These two could have no clue what it is to be on a housing waiting list, to grow up in a cycle of poverty or to actually having advanced plans to buy your own home and then through a major financial setback having to start over while continuing to pay rent to a landlord.
Being on a housing waiting list does not necessarily mean that you are waiting specifically on a free RDP house.
The waiting list is also for council rental units or for people purchasing subsidised council-owned houses whereby the purchase is done in a similar manner to paying off a loan.
They also seem to be unaware that not every backyard dweller (or squatter for that matter) qualifies for any of the above.

When a household earns just above the R3500 a month ceiling, there is a huge gap before they reach the minimum disposable income a family should have in order to qualify for a 'normal' bond.
Oh, and seeing expensive looking cars parked at poor peoples' houses does not always mean the cars are really expensive or even theirs. One can buy a very neat looking BMW that from a distance looks similar to the newer models for as little as R30000 cash from a once-off windfall, or an unsecured bank loan, yet that doesn't mean you qualify for a half million Rand bond.

The growing waiting list for state-built houses and the fact that more and more people fall in that no-man's land between qualifying for state-housing and qualifying for a bond, means that the amount of backyard dwellers continues to grow.
The people who fall into that income bracket which is like a state of limbo, include single young people starting off careers as well as married couples of which the one partner has no income or a fairly low income, and together they earn just less than what would qualify them for a bond.

The conditions of backyard dwellings range from the dilapidated and poorly serviced i.t.o. water, sanitation & electricity, to plush all inclusive accommodation in fairly well-off neighbourhoods, but they all have the same things in common; They are not owned by those who occupy them and almost everyone living in a backyard dwelling would prefer owning their own home.

The supply of low-cost RDP houses will not easily catch up with growing waiting lists and some attempts are being made by the City of Cape Town to ease the plight of backyard dwellers who rent on council-owned property by connecting them with electricity, water and sanitation services separate from the main dwelling. Of course there are some naysayers claiming that it is simply an appeasement tool but in realistic terms, the council is in some way acknowledging that those people cannot wait until the housing supply crisis is solved.
Making more houses available would be the ideal but for many the relief provided is much needed.

This by all means does not justify that the city's housing policies are still in many ways not geared towards servicing the poor. An attempt by backyard dwellers in Mitchell's Plain to launch their own housing project has continuously run into a minefield of bureaucratic red tape after purchasing their ideal parcel of privately owned land in 1999.
Their projected completion date of June 2010 has long since passed and very little is known how far they have come since then.

For those who want to own their first home, including the many backyard dwellers who do not qualify for state supplied housing, and have a combined income of between R3500 and R15000 per month, there is some hope in sight.
The national government is offering the Finance Linked Individual Subsidy Programme (FLISP) but this has just one major drawback in that the value of the home purchased has a ceiling of R300000 and there is a huge shortage of newly developed properties for sale in that price bracket. Finding an existing property at that price is however possible and will probably be what most who can afford it will aim for.
FLISP unfortunately only brings relief to those who manage to secure a bond for the purchase price below R300000 less the calculated subsidy.
Though initiative is helping many people benefit from subsidies ranging between R10000 & R87000 and is definitely a step in the right direction, many are still left out in the cold.

Banks are now also starting to offer home loans to low income buyers who earn between R1500 & R7500 per month and can actually manage to find a home that is priced low enough.

The phenomenon of backyard dwellers has been coming along for generations and does not seem to be something that will be eradicated soon. Any attempts by authorities to address the problem of housing shortages should not just focus on the majority of squatters and backyard dwellers who earn below R3500 but they should also continue trying to find new innovative ways to also help those who somehow fall short of qualifying for a normal bond due to having erratic incomes just above the R3500 ceiling.

In the meantime those property owners who have invested in creating rental accommodation in their backyards can all rest easy as they surely will not be running out of potential tenants in the near future.

0 0
Published in Opinions
More in this category: « Mandela Day Fashion nunSense Are you full of CRAP? »
back to top