Can’t separate language from people who produced it 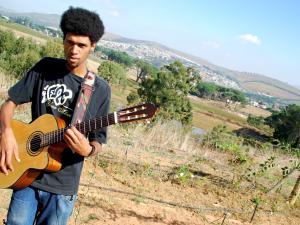 One of South Africa's foremost proponents of Afrikaans Hip Hop, and perhaps more specifically the Afrikaaps vernacular, Jitsvinger expresses his views on how the cultural suppression of Afrikaaps affects the population group who are the actual originators of the Afrikaans language. - Editor

After being the first Afrikaans hip hop artist to perform at the Cape Town International Jazz Festival, it made me realise how slow the pace of liberating ourselves through our language has been. What makes this fact even sadder is that the Cape has the most diverse genetic DNA in the entire world yet it’s being reflected very dimly across so many platforms in our society – creating exclusivity where culture is promoted.


Decision makers in high positions drag their feet when dealing with the issue of language while ignorant and ridiculous notions of purity have bled the country into xenophobia as a horrific result thereof. Teach the youth their history, share the knowledge of indigenous languages, for example, the clicks that the Khoe shared with the amaXhosa through intermarriages which were commonplace from as far back as the pre-colonial period....

Click here to continue reading the original artical on IOL

More in this category: « How I, as a young coloured woman, feel connected to Saartjie Baartman Who says Bursaries are not for us? Go get yours. »