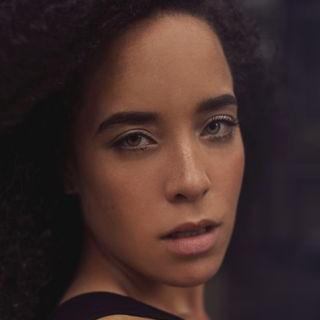 "The function of these stereotypes is that they masquerade as ‘natural’ and inherent aspects of being coloured..."

In the darkened confines of a Johannesburg theatre, a popular comedian took to the stage, delivering a stunningly offensive ‘joke’ as his opening line. He stated: “I have not seen this many coloured people since I looked in the bin at a Marie Stopes clinic”. Nervous laughter, stunned silence and sudden intakes of breath were among the audience responses. A tired, damaging stereotype, used to attempt to elicit laughs from the very people who are most deeply affected by it.

I recalled this moment, as I came across a Facebook status that has been shared in some circles. The post is as a response to a devastating tragedy in Kakamas, where five young children playing in an unused freezer in their grandmother’s backyard were found dead after it is believed to have accidently locked, trapping and suffocating them inside it. 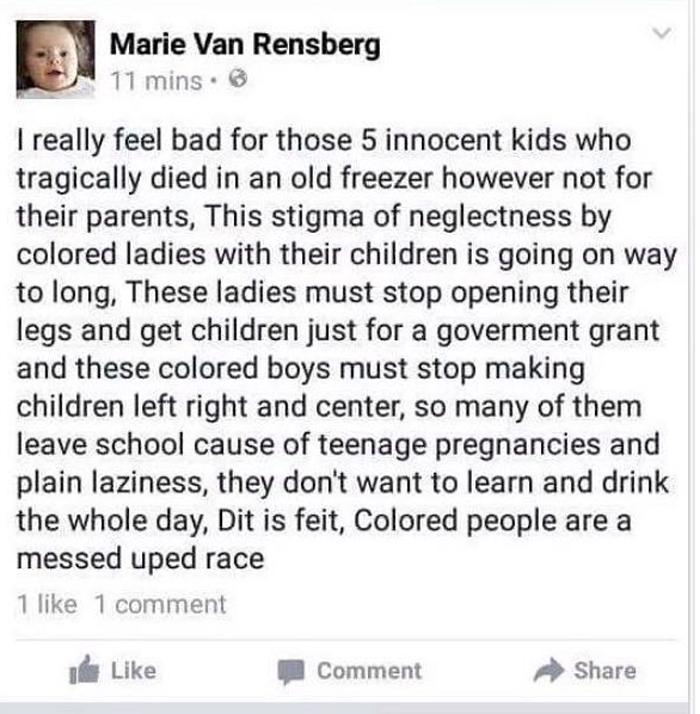 As Songezo Zibi pointed out, in an importance piece on online racism: “social media creates a close proximity between social classes, races and genders that is physically almost impossible in a historically divided society” that is “unable to navigate itself out of its own history”. As a result “People of all kinds come across ideas and statements that are alien to what they have been socialised to understand. This creates tension on these platforms that remains under the surface in real life”. Dinner party conversations that used to remain in closed circles have moved online, as the line between public and private statements becomes increasingly blurred.

It is not so much that these utterances are ‘new’ in their expressions in varied forms of bigotry, but they are as Sisonke Msimang phrases it ‘hardly creative’. We are familiar with their vocabulary and grammar, and we ‘recognise’ them and their echoes in our lives.

Van Rensburg’s post recalled the now infamous Sunday World column by Kuli Roberts that detailed familiar stereotypes about coloured women. In it, they were cast in the same rough outline as van Rensburg’s depiction – albeit cast in a failed attempt at satire. It is out of this tired mould that that comedian crafted his ‘joke’.

All of these statements form part of what Fanon called ‘a galaxy of erosive stereotypes’ that haunt people of colour. These stereotypes are constant and consistent. They are rooted in historical imagining. They are relentless and are too often left undisturbed in people’s circles of intimacy and public representation.

Representations of coloured people, through various forms of media and public dialogue, often conform to stereotype. While the slang, like ‘awe’ and ‘watkind’, fashion and lifestyle of coloured people is increasingly becoming part of a cool aesthetic, it remains pop culture fodder for others to drape themselves in, reserved for those who do not have to live the full experience of occupying the fraught identity. This experience is constantly punctured by negative stereotypes that reduce an incredibly complex group that is not homogenous in any respect, to caricatures. People become simply gangsters and violent thugs, promiscuous and lewd, uneducated and loud, constantly drinking and drugging, and with no front teeth.

The function of these stereotypes is that they masquerade as ‘natural’ and inherent aspects of being coloured that are entirely accurate and can be applied to all. They create a predetermined script to both follow and understand. People lose their individuality. They simply become part of a group. They are Van Rensberg’s ‘messed up race’ in the racist’s imagination, and nothing else.

Danielle Bowler holds a master’s degree from Rhodes University and is a Mandela Rhodes scholar. She is currently an assistant researcher at Mistra and a member of Feminist Stokvel. She likes to think critically about the world around her, which often includes making complex political arguments about pop culture and Beyonce. Follow her on Twitter: @daniellebowler

More in this category: « The Anatomy of Racism Indian today, coloured tomorrow and black the next – my racial identity crisis »
back to top