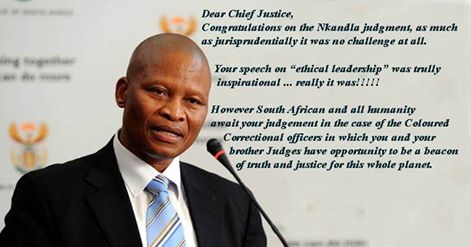 The Case of the Coloured Correctional Service Officers.
.
Coloured officers (and one White) are being denied promotion even though they have been recommended by assessment Boards after very long service. Government wants the posts filled by "other" South Africans.

Our ANC government contends that the issue must be decided on the basis that these "other" South Africans are “black” which Coloureds are not.

a) This is in terms of the ANC government’s employment equity plan.


b) The Court is being asked to accept that this is right because “Blacks” suffered more than Coloureds in the past.

c) History tells us that the suffering for Coloureds actually started from the time a European first visited/landed at the Cape of Good Hope in the 1600s … and that the oppression of African tribes started much later, about 100 – 150 years later.

d) History also tells us that the suffering of Coloured folk included the genocide of their kith and kin, being the KhoiSan, of whom they are the only direct descendants.

e) History tells us that the KhoiSan were the original exclusive and/or dominant inhabitants of the whole of the Western Cape (“WC”) … and more.

f) History tells us that the other African tribes had no claim(s) on the Western Cape and only inhabited it under colonial oppression.

g) So the historical reality is that the other South Africans have no claim on the WC other than in terms of their so called “blackness”, that they acquired under colonial oppression.

i) The eleven or so dominant African tribes in the region, Zulu, Xhosa, Pedi, Shangaan, Sotho … etc. have all submerged their once proud individual tribal identities and amalgamated under the “black” brand label.

j) However, the reality is that Black is not a race, tribe or ethnic group and it did not exist prior to colonialism. It was imported from the USA where it was invented during what is known as the “Jim Crowe era”* for the specific purpose of differentiating mixed race folk with just “one drop”** of African blood in their veins for the purpose of oppression ... and was imported and used for oppression in South Africa.

k) The label “black” gained acceptance in the USA because all humans with the dreaded “one drop” were forced to join together to confront and defeat oppression in the heroic Civil Rights campaigns under Dr Martin Luther King Jr in particular.

m) Having humans grouped under a label or brand name is not a new phenomenon. Hitler and the 3rd Reich did a similar thing by inventing the label/brand “Nazi”, for the purpose of dominance, which then attracted over 12 million Germans.

n) So the Court is being asked to accept that a member of the Pedi tribe, for instance, who would otherwise not be a member of a majority group, in relation to the Coloured group, must now be treated as part of the majority just because he has classified himself under the brand name “black”.

What brings out the rottenness and crass hypocrisy of this ANC government is that Coloured folk are actually classified as "black" under the Employment Equity Act; but, as I have argued, ad nauseam, this racial approach guarantees racism.

So Chief Justice Mogoeng Mogoeng, I am putting it to you that this is completely inconsistent with “ethical” leadership of government.
It is the vile face of racist bigotry served up as “equity”.
As a Judge, sworn to uphold justice “without fear favour or prejudice”, you will see through this vomitus offering.

This is NOT an "equity plan" for humans.
It is a diabolical plot.

There is no doubt that you will see it for what it is ... that it is “cruel, and/or inhuman and/or degrading” for being the “tyranny of the majority”.

The question is will you then condemn and reject it because that is what judicial "ethics" demand of you and your brother Judges sitting on the Constitutional Court Bench??

Your "ethical" standard is set by your oath of office to act "without fear, favour or prejudice".
Will you????

Published in Opinions
Tagged under
More in this category: « The Ordinary Magic that can change a child’s future Well Intended Advert about Violence on The Cape Flats Misses the Mark »