Why are Coloured Women so Angry? 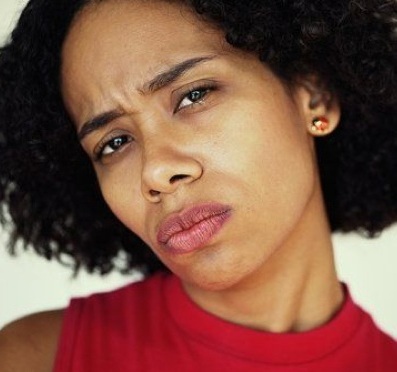 Nadine has been asking herself this question since she was a little girl.
Now as a woman she shares some of the conclusions she has reached,

I Am Not Your Weekend Special
by Nadine Dirks

Growing up in a Coloured area, with many women of colour, I’ve always wondered one thing, “Why are women of colour so angry?”. As a child, it always seemed unclear to me, there wasn’t one clear outlying reason for their anger, yet they all seemed to carry it on their weathered faces, as they went about their day.

Now that I’m grown, and a woman of colour myself… I woke up one morning, checked my Facebook account, as many of us often do, and read the news… I realised that I had become an angry coloured woman, seemingly overnight – it all become abundantly clear to me.

I was so mad… For years men have treated coloured women like second-class citizens, while we do all the heavy lifting and more often than not they did most of the drinking and not to mention, the cheating. I was mad that I had to fight for my education, I was mad that my childhood included way too many drunken men, I was mad that walking home from school was not safe for a girl.

I was mad that men still had the upper hand, and decided on my fate although they have never had to walk a day in my shoes… if they did, they would know that catcalling is a form of sexual assault and makes my skin crawl. I am infuriated by the fact that I have to take the bus home from campus, while grown men hand my friend and I notes with their numbers on it and obscenities such as “I can rock your world”.

I am angry because I am still an object.

I am saddened by the fact that I will always, not matter how hard I work, pale in comparison to my white counterparts… even post 1994 South Africa.

I am angered by the fact that my hair makes people uncomfortable, my skin is too dark and my accent isn’t just right or white. I am angry that I will probably always question my worth as a woman of colour, and my abilities because of an archaic system.

I’m mad that we don’t discuss things that matter in coloured communities and that we sweep rape and molestation under the rug, while we spend our time in churches, looking at who’s wearing an on point outfit.

Why are white women just called feminist, and I have to settle with just being angry?

I am angry that in my lectures, even when I have something valuable to add to the discussion, guys in my class still speak over me, as if I wasn’t there and seemingly understand the concept of manners and waiting their turn to speak when another man is in the process of speaking.

I’m angry that a guy friend of mine, scoffed about my mental illness saying “all women need anxiety medication”

I am disgusted by how most of the coloured men I have come across treat their wives or girlfriends. Let’s be honest, many coloured men still expect women to be a doting wife, mother, maid, sex slave, while working a full-time job. Why are you still keeping us in a box, by beating us into submission when it’s clear that my great grandmother tried to pry her way out of that very box, with her nails?

Women of colour are mad because we face rape, molestation, verbal, physical and mental abuse from the time we’re born, oftentimes by our own relatives, teachers, community leaders and even strangers on the street… I remember walking home from school with my big sister and being absolutely terrified because the local drug dealer had sent word that he “wanted” my sister. How dare anyone “want” someone, we are not objects, to be desired and bought.

I am tired of watching strong women, who could change the world, being silenced and living their lives angry at the Man.

I am frustrated that women of colour choose to break each other down, break their daughter-in-laws and even their own daughters because we’ve been broken down ourselves for so long, that the only love we know how to give is that filled with strife and passive aggressiveness. We need to celebrate, uplift and encourage each other.

I am tired of everyone else telling our stories and singing our songs, why do we not tell our own stories? Is it because we’ve been made to feel inadequate, uneducated and useless? It is time to be heard.

Why do we feel the need to be white-washed? Why do we still dote on white people as if we still view ourselves as inferior…have we been that affected by generations of oppression and pain?

I am done being a statistic, I am not a criminal, an immigrant, illiterate, I do not have 4 children. I am not the face you see on your TV or the person who breaks into your home.

I am done celebrating the European in me but overlooking the Asian, black and Khoi. Why have I, an educated woman of colour, allowed myself to be brainwashed into believing only one part of me was worth being spoken of?

I used to think being an angry women of colour was crazy, unnecessary and bizarre as I hadn’t experienced the world, I had not yet walked into a company and been overlooked because of being a women and of colour. I had not yet been asked about my ethnicity because I look “racially ambiguous”. I had not yet been called a “know-it-all” or been told by male relatives that I “talked too much”.

I had not yet been told… “You have to carry your cross”…  I have, although my shoulders are small, I have carried mountains of sorrow… I refuse to carry any longer.

I am done being told “no” or “you can’t”… I am done with sitting appropriately, I am done with accepting that “boys will be boys” and that I am a young lady and “therefore should act as such”. I am done with fitting into the patriarchal mould.

I am not your weekend special...

More in this category: « THE STATE OF THE SO-CALLED COLOURED NATION IN SOUTH AFRICA Let Us Live - Three generations of women; one shared narrative. »
back to top