Why Wayde's Gold is a Win for Coloured Identity 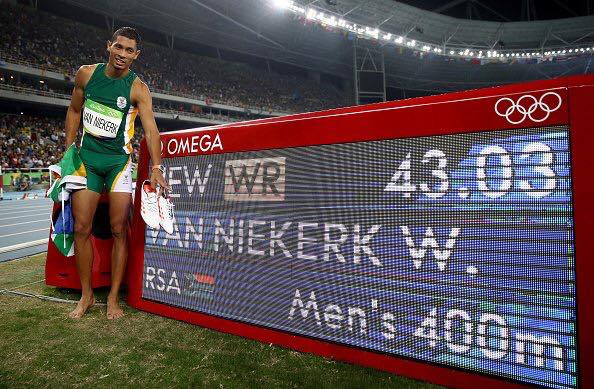 The term “Coloured” began trending on Twitter after Wayde van Niekerk won Olympic gold and set a new world record, and that’s okay, says Carla Bernardo.
Many of the issues she explores in this article are in fact what Bruinou.com is all about.

Cape Town - So, while the rest of the world began celebrating Wayde Van Niekerk as an incredible athlete who - at the tender age of 24 - smashed a 17-year-old record, somewhere along the line, we South Africans began debating about who, as a race group, gets ownership of Team SA’s only gold medalist in Rio.

The term “coloured” began trending on Monday morning and my immediate reaction was: “But why? Let this boy bask in his well-deserved glory, at least for a day.”
But almost as soon as I thought that, I realised what Wayde’s win could do for the coloured narrative in South Africa.
Now see, I have recently started proudly identifying myself as coloured.

This was something I fought for many, many years. I was taught to resist society’s attempts to box me, to resist feeling defeated when asked “What are you?” every day for as long as I can remember. If I was to identify myself racially, it should be black, as was always the case with my family during apartheid.
But then, particularly over the last two years, I began self-identifying as coloured for a number of reasons. You begin feeling marginalised, excluded from the South African narrative, called upon only when the Democratic Alliance and ANC needs your coloured vote in the Cape. You’re not white enough or black enough. You’re not quite sure of your history but you know that somewhere along the line there was rape and violence and having been conquered.

You know that your parents and their peers had a part to play in the liberation struggle and proudly identified as black, but where are the Western Cape heroes in the history books? Where are the athletes who sacrificed fame and fortune because, you know, no normal sports in an
abnormal society?

And then, something beautiful happened.
People started talking about Ashley Kriel, the Cape Flats’ very own Che. Those coloured MK vets who sacrificed alongside their black brothers were being acknowledged. The Khoisan Revolution reignited discussion about First People in the Northern Cape. The Institute for Justice and Reconciliation allowed for young, coloured South Africans to share their lived experiences.

And, Wayde Van Niekerk - a boy from Cape Town whose mother was more than likely one of the SACOS-aligned athletes forced to run on a cinder track despite times greater than her white counterpart - was smashing records all over the world, putting South Africa back on the map after what was a relatively messy and shameful period in our sporting history (Oscar, Fifa, you know).

More in this category: « Let Us Live - Three generations of women; one shared narrative. Don’t be Fooled by My Complexion »
back to top