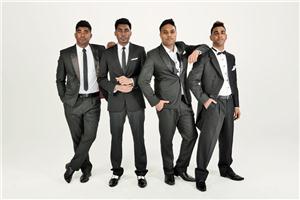 Local boy band, JAG, are back and tickets for their show at GrandWest Grand Arena on Saturday 7 September are already sold out.


(This article by Louisa Steyl [@LouNotes] was originally published in TygerBurger. We at bruinou.com think that if a show sells out as fast as this one did, there should be another night added - Editor)

The band, celebrating 10 years, is made up of brothers Emo and Loukmaan Adams, Mono Dulisear, Nur Abrahams and Sury Boltman.

“About 10 years ago I had an idea to start a boy band that rips off other bands,” explains Emo, adding: “and with that JAG was born.”

“So what started as a joke actually became one of the biggest part of our careers,” he says.

The group enjoyed many highlights, like touring Malaysia and filling Good Hope Centre with 12000 people.

“But before we had awesome gigs, we did schools, weddings, carnivals and it just grew from there,” Emo points out.

The group’s aim was always for the members to pursue solo careers and Emo explains that the singing in the group, helped make this happen for them.

With one of the group’s members moving overseas, Emo says it seemed like the right time for them to reunite.

“Fans have been asking us forever to come together again, we were just waiting on the right time,” Emo says.

The national tour, which ends in Cape Town, will also serve as a farewell tour for the band.

“This is really just our way of saying thank you so much to all the JAG fans for all the support over the years and we appreciate that you’ve supported us as a group and solo acts,” Emo says.

“Maybe in another 10 years we’ll come together but we are all solo artists now and want to put focus there, however we still help each other on individual projects,” he says.

Emo says fans can expect a look into the JAG journey, at the show.

“When people hear the name JAG, they already know ‘Hier Kom ’n Ding’, but what is nice this time round we give them the old with the new,” he says, adding: “The story of how we got to be JAG and I think that’s nice.”

Click here to see the original article in TygerBurger

Published in Entertainment News
More in this category: « Hot new comedy performance - "From Where I stand" Madfingaz & Jean-Pierre. The New Black »