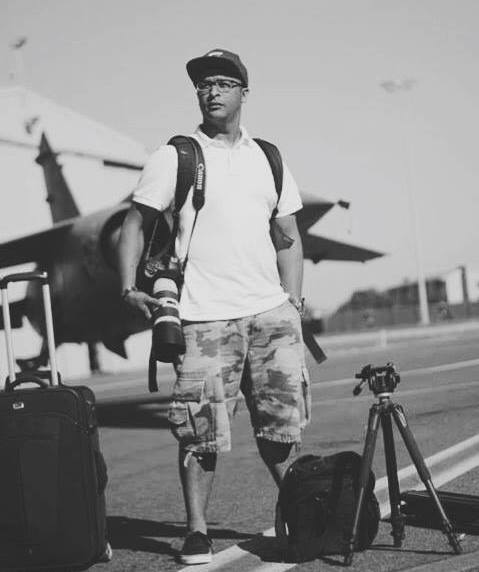 We live in the era of video streaming in which every movement of a dance can be filmed with a basic cellphone or the most expensive video camera and streamed on the internet or broadcast on satellite TV. It is then so much more refreshing when a stills photographer comes along and captures action images of dancers that perfectly displays their fluidity and invokes in the viewer a sense of "being there in the moment".

Ference Isaacs who has graciously allowed us to use his images in some of our past articles is originally from Kewtown in Athlone on The Cape Flats and now lives in Parow Valley. He has recently returned from UK where he accompanied Heal The Hood & the African Hip Hop Indaba dance champions to the 2014 UK B-Boy Championships and he took time out of his busy schedule balancing a career as an alarm technician and building his career as a professional photographer to chat with us at bruinou.com.

"I started learning about photography at the age of 12 through my dad who had quite a collection of vintage cameras. He showed me the basics at the time and that's where my journey started".
He started taking photography much more seriously after he bought his first DSLR camera in 2006 and has developed his craft to such an extent that his images have recently been featured in a coffee table book that celebrates the different forms of dance through photographic images.
"The 'I Praise the Dance' coffee table book makes me smile each time I look at it, Michael Britton from PANSA (Performing Arts of South Africa) approached me a while back to have some of my images featured in this book"
The book can be obtained directly from the PANSA website.

Ference also photographs other aspects of urban culture and has recently started documenting the moves of skateboarders across the Cape Peninsula and we asked Ference what other achievements and accolades has marked his career as a photographer.
"I won the R5000 first prize for one of my images in a photo competition and that really boosted my confidence.
I've also photographed quite a few major events in Cape Town e.g. The Red Bull BC-One SA Cyphers, Fam Feuds - RFK and a definite favourite of mine is the annual African Hip Hop Indaba presented by Heal The Hood."
"It is Heal The Hood that made my trip to the UK B-Boy Championships possible. It was something I've always dreamed of so when Heal The Hood approached me I grabbed the opportunity with both hands."
"This competition had a major impact on me as it was my first international event I photographed. I've never seen so many dancers compete on a world stage. My outlook changed immediately and it has definitely sparked off a new vigor in me. These dancers are on a completely differently level and I realised as a photographer one can never become complacent. You need to stay relevant all the time."

Being well-known for capturing images of dancers in action was never what Ference pictured when he first looked through a lens and until the first time he did, he was not ever really involved in the urban cultures of Hip Hop dance or the skateboarding scene he has recently started photographing.
"I wasn't involved in any of these at the time. I was asked to attend a youth service at a prominent church in the city and at that event I saw these B-Boys 'Immortal Style' doing amazing acrobatic movements with their bodies. I felt so much adrenalin and energy from the performance that I made contact with the guys after the show and said that I was really interested in photographing them. I can truly say that from there I just allowed this passion of mine to lead me."

When we asked Ference what he does to relax when he takes time off from the adrenalin rush of photographing urban culture in action, we did not expect this gem of a cliché; "I like long walks on the beach". Seriously, he really does and sometimes he takes his camera along and gets some great scenic shots.
He also confesses his love for gaming "Ek is 'n gamekop! Playing PS3 games is the best way to unwind"
"I also love coffee. I like to frequent different coffee shops in and around Cape Town"

He cites the international photographer Nika Kramer as one of his biggest inspirations when it comes to  his craft and he says he aims to turn photography into a full-time career.
"From what I know, most photographers have day jobs and one needs to be an exceptional photographer to venture out on your own.  but what I have learned growing up in Kewtown is that on can be anything one aspires to become"
Ference's advice to the youth and the parents of those youth who are interested in photography as not only a hobby but something they want to excel in, is to start developing that interest from as young as possible and to try and get access to all the interesting tutorials available on Youtube.
"For those on a tight budget there are quite a few entry level DSLR camera options on the market and one of course does not have to start off with a brand new camera"
"I'm a Canon shooter and I prefer Canon. A very basic first DSLR camera would be a Canon 450D with a 50mm F1:8 lens which allows for lots of creativity."
Ference occasionally takes time out of his busy schedule to mentor younger photographers as shown in  the brilliantly shot video below.


We at bruinou.com having had the privilege of using pictures from Ference Isaacs Photography in a few of our articles asked him what his secret is in capturing the essence and the emotion of dance in such a profound way and what he aims to do in stepping up his game even further.
"I tend to cut myself off from the surroundings and focus on the task at hand. At first it was difficult getting used to all the high energy around me but now it's become second nature to capture those once in a lifetime never to be repeated moments."
"The music really plays a big role as I anticipate the dancer's movements. It's strange to say this but I almost feel like I become one with the dancer and the results of course are those priceless moments captured in a picture."
"I would love to experiment with lighting trying out different forms of studio lighting and outdoor portable lighting. I feel that it will just catapult my photography into another dimension."
"I also continually experiment with different techniques in order to maintain a high level of freshness and relevance."

We certainly believe that Ference Isaacs has brought an immense amount of relevance and freshness to introducing urban culture to the general public through his rare photographic skills. We at bruinou.com look forward to seeing many more dance and other urban culture moments captured through his lens.

0 0
Published in Entertainment News
More in this category: « Jazz On The Vlei 2014 D-Catalyst EP Gift Rapped »
back to top