Get soaked by the Splash When Bruinou.com first experienced being splashed by one of her impressive on-stage performances at a 2014 park jam in Paarl, we were soaked in awe. Splash On Stage, otherwise known as Laurika, had the crowd fully hyped up and participating in her electrifying performance. To say she makes a splash is an understatement. Dit was sopnat!

A native of the Southern Cape Garden Route and having lived in Port Elizabeth as well as Cape Town, she now once again resides in her hometown of George where she has been working as a nurse since 2011.
Dedicated to her profession, and with a deep sense of community, it is her involvement with Hip Hop and other forms of performance arts that first got our attention but we soon found out that she has her finger on the pulse of what happens culturally and societally in the Southern Cape.
We are proud to welcome her to the Bruinou.com team and soon you will be reading some of her news and views on our pages but first we want to introduce you to this phenomenal lady.

From a young age she always knew she was going to wow audiences but she would never have imagined that it would be through music. "I was a ballet dancer in Primary School. I've always had solo or lead performances throughout those years but I'd still be part of the before and after pieces as well, rushing to either change back or change into the next performances outfit."
"I've always thought I'd end up being an actress on screen or in theatre and not on stage performing music. My interest in music only started when I was around 18 years old"

She started off writing and performing in English but it was when in recent years she started doing Afrikaans as well that her brilliance as a lyricist came to the fore and combined with her ability to hold a crowd in the palm of her hand, she is set to make a huge impact on the growing relevance of Afrikaans rap which now more commonly is called 'rymklets'.
Her lyrics and rhyme schemes have a complexity that one could say is based in its simplicity. She avoids making her work come across as over-intellectual, yet she manages to address complicated issues in a way that un-layers a lot of depth to reveal straightforward clarity.
On the other hand some of her songs like "Sexy Boude" are simply about having fun and projecting that sense of fun onto her audience who by all accounts lap it up each time she performs live or wherever her music is played.

Of course we thought we could get her to share her secret of how she goes about writing her lyrics.
It turns out that there is no secret or magic formula and that her process is quite simple, in fact it is daringly uncomplicated compared to other artists.
"I usually get inspired by an instrumental and I write whatever comes to mind. That will either be my hook or my verse."
"Lately I'm keen on writing verses first then I vampire-suck my hook from out of there."

Her next statement defies everything that most lyricists see as one of their most important rules but where many others who try breaking that rule end up sounding dislocated and flimsy, Splash On Stage manages to nail it virtually every time.
"I write but once. Only once, and never do I go back to check and correct."
"I write one draft and that's my final product. Whatever is on my page is what gets laced as is."
That is quite daring but it is in all likelihood why her songs come across as honest and real.

Laurika has been traveling with a show called "Hip Hop in jou Plek" for quite some time now.
Founded by Danny B, a former rapper and B-Boy from Oudtshoorn, the show goes to areas where there usually is a lack of opportunities for youth to see artists performing live or for them to show off their own performing skills.
"We literally take Hip Hop to them, presenting aspiring artists and B-Boys with a platform to showcase their talents."
"We've recently been to De Rust and Dysselsdorp where the support and interest was phenomenal"
"I'm looking forward to when we bring the show to my hometown, George, and then on to Knysna."
"Those cats had better be ready to show us what they've got."
Her belief of "Let us allow each other to grow and be genuinely happy and excited with and for each other", is not only reflected in her dealings with aspiring young artists who participate in "Hip Hop in jou Plek", but is also reflected in her other endeavours. 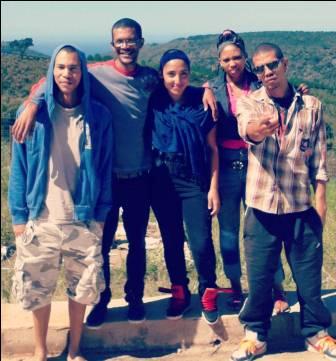 She believes in meaningful direct interaction when dealing with others and sites her grandparents as the greatest influence on her personality.
"We didn't have much but we had enough. I was their only granddaughter and that made us very, very close, which probably contributes to me being able to connect with people on a deep and personal level."

Though Splash on Stage is aware of her growing popularity as an artist, she takes everything in her stride. "I do not bite off more than I can chew, so for now it is "Hip Hop in Jou Plek.  Be on the lookout. We might just be in your area next."
"I'm also tackling a small project on the side which is a collaboration disc featuring various artists as well as different genres."
"I am in no hurry. It will be out when the time is right."

There is something more precious to her other than her work as a nurse or her passion for performing her music.
"I have the most beautiful soul of a son who is 2 years old and his name is Ocean."
"He rejuvenates my spirit in a way that no fancy worldly item or beautiful destination can do. It is just my son."
"I can name so many things I have planned for my son and I but it has to align with Gods plans."
"Whatever does happen happens. I'll be where God needs me to be."

You can also listen to her music as well as get downloads from her Reverbnation Page.