Stuart Taylor's 2015 in Revue - A Triple Dose of Comedy 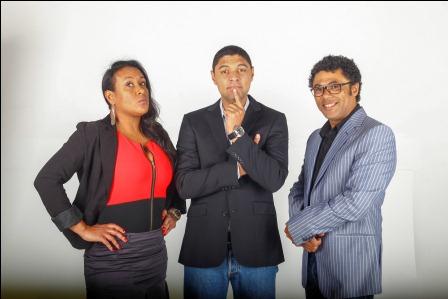 Recently having scooped the Standard Bank Ovation Award for comedy at this year's National Arts Festival and following the success of his ninth one-man show Bespoke, one of South Africa's most popular comedians, Stuart Taylor, comes to the Baxter Concert Hall this festive season with his latest comedy production, Stuart Taylor's 2015 in Revue.

Running from 1 December 2015 to 9 January 2016 Tuesday to Saturdays, Stuart brings his hottest comedy offering this holiday season in a feel good show reviewing 2015, from the highlights, the low-lights to the lack of lights experienced due to blackouts and load shedding.

Stuart is offering three lucky bruinou.com readers a chance to each win a set of double tickets to one of the Preview Shows. Check for details further below.

Local audiences can expect a triple dose of comedy as Mel Jones and Oscar Petersen will be joining Stuart on stage, both bringing their unique flavour of humour and entertainment to the show.  Theatre-goers are in for a treat with the likes of an actor, comedian and entertainer coming together on one stage taking the funny out of life's situations from personal stories, local and global attention grabbers, to comedy sketches and the super highway social media world we live in today.

Stuart's award-winning solo shows have seen him perform locally and abroad from the comedy clubs of America to performances across Europe to participating at International comedy festivals in Edinburgh, Berlin and Switzerland.  His conversational-comedic style has charmed and delighted audiences in maintaining that unique comedy experience. 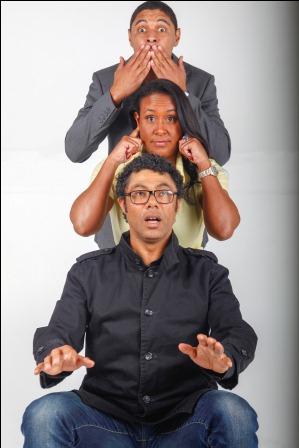 Mel is no stranger to the comedy circuit donning many hats as a comedian, MC and entertainer, award-nominated producer and single mom.  She's a familiar voice on local radio & television and is well-known for her appearances on SABC.  She's performed on stage in several comedy shows and festivals across the country, from the Blacks Only Comedy show, Heavyweight Comedy Jam, Kings and Queens of Comedy to the Vodacom Funny Festival.

Actor and stage performer Oscar Petersen will bring his own twist to the show.  His best known among Cape Town audiences for co-creating and starring in the two-man comedy theatre show Joe Barber, which celebrated its 15th anniversary at the Baxter in 2014.  His career in the entertainment industry spans over 20 years having performed on stage, film and television. Oscar's stage successes Meet Joe Barber, Boeta Gamat too, Joe Barber and Suip have affirmed him as one of Cape Town's leading writing and performing talents.

The show is directed by Brent Palmer with additional material written by local comedians Martin Evans and Yaaseen Barnes.  Martin is renowned for his originality and quality of performances. Described as 'a cynical grouch with a sense of humour that's intelligent and sophisticated', his demand has taken him across the globe from headlining and mc'ing shows in England and Wales to Dubai, Spain and Belgium.

Yaaseen is a new rising talent on the local comedy scene and a master of his craft in his genre as a one-liner comedian. He's performed at major festivals such as Rocking the Daisies and the National Arts Festival in Grahamstown. Barnes also won the coveted title of Goodhope FM's Laugh Master and was nominated for the Comic's Choice Newcomer of the year in 2014.  At this year's 5th annual Savanna Comics' Choice Awards he won best Newcomer for 2015. 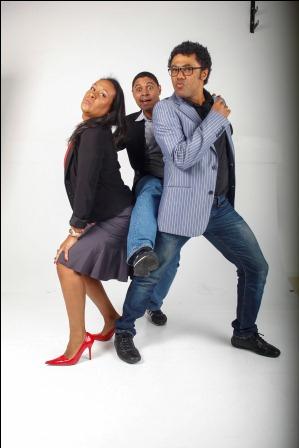 “Audiences can look forward to a fun filled evening with comedy that caters to all tastes. It's a must see show for everyone in need of a feel good experience to see out the year. Oscar is hilarious and Mel is sure to delight”, says Stuart.

From stand-up to comedy & sketches, you definitely won't want to miss these three class acts on stage as they say goodbye to 2015 and bid a warm welcome to 2016.

For a limited time tickets are discounted to as little as R90 but will soon revert to their normal price of between R100 - R200 and booking is through Computicket on 0861 915 8000, online at Computicket or at any Shoprite Checkers outlet. For discounted corporate or block bookings, fundraisers and charities, contact Sharon on 021 680 3962 or Carmen on 021 680 3993 during office hours.

Share&Win
For your chance to win one of three sets of Double Tickets to a Preview Show of Stewart Taylor's 2015 in Revue, all you have to do is Share a link to this article on your Twitter or Facebook profile with the Hashtag #bruinoudotcomedy and we will do the rest.
Winners will be selected solely at our discretion based not only on your number of shares but also on the creativity of your posts, So try to make yours noticible. Be funny, Silly or simply unique.
Competition Closes at Noon on Friday 27 November2015 and winners will be notified via a message to  their social media profiles.
The judge's decisions are final and no correspondence will be enterted into.
Bruinou.com, Stuart Taylor and any of either of our associates will mot be held liable for Fits of Laughter or any other real or perceived injury or damges caused by the use of these ticket prizes,