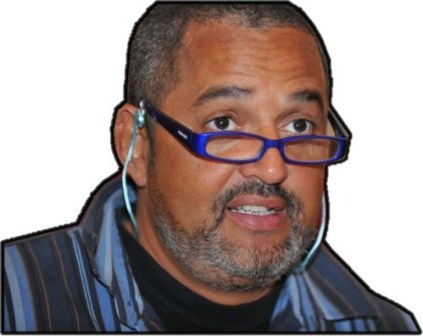 Applauz Arts Initiative assisted Prudence Layne, Assistant Professor of English & Coordinator of African-American Studies at Elon University with her project on Protest Art & Political Struggle: Profiles in Anti-Apartheid Courage and Entrepreneurship.
Her three-part easily digestable but very insightful video interviews of Kurt Egelhof are a part of that project and in these he first-hand reveals the many different aspects of himself so that you will no longer have to ask "Who is this Kurt Egelhof?".

Watch: Who is this Kurt Egelhof Part 1

Kurt made a permanent move to Cape Town around a decade and a half ago, and I think it's partly because of his addiction to waves that he and his family chose to settle in Muizenberg.
Kurt Surfs. He surfs a lot!
I've always known that surfing was no longer just a 'white people's thing' and that there are many young surfers of colour, but I was in equal parts shocked, amused and awestruck that this ou-ballie Bruinou loved playing in sharks territory. He however has a great respect for sharks and it is from him that I learned that surfers call sharks their "landlords".

In between all his theatre work Kurt also fronts an always evolving band that apparently has never been founded and is not supposed to exist. He is the soul member, or should that be the sole member, of The Neva Wazza Band.
In reality as a live show, it is a one-man-stand-up-musical-comedy project which also saw "the legendary band that vanished before it was born" release an album called 'African Rocks in My Head' featuring "South Africa’s oldest newest rock star that never was".

Watch: Who is this Kurt Egelhof Part 2

In his current theatrical offering, For Generations, which has been running since 2008, Kurt Egelhof uses his autobiography as a bio-drama to tell a universal story about the legacy we leave for our children's children for generations to come.

It is an interesting play on words that For Generations spans ‘four generations’ and this one man show which he has performed across the country and internationally tells the story of how generations of fathers and sons all influence the future generations they spawn. The play starts off with him playing his World War 2 era grandfather, his father who worked in Durban Harbour, himself the actor and his son the university student and ambitious cricketer.
For all the strong social commentary that his play makes, its main strength and the reason for its longevity and success lies in the fact that Kurt always aims to thoroughly entertain.

One of the most important things about him which I have learned from our many interactions over the past few years is that Kurt Egelhof is a highly opinionated individual and most of his opinions are intended to make you react.
He is the first to admit that he is an angry man. It's a healthy type of anger, and it seems that if he has his way, his opinions should make you angry too. He wants you to be angry.
Don't take our word for it... Watch him tell you more about himself than I could ever tell you,
...and maybe this Entertaining Angry Surfer might just teach you a thing or two about creatively using your own anger too.

Watch: Who is this Kurt Egelhof Part 3

More in this category: « Fruit Vendor Stands Tall Among Giants Superfly. The DJ, The Legend, The Man. »
back to top