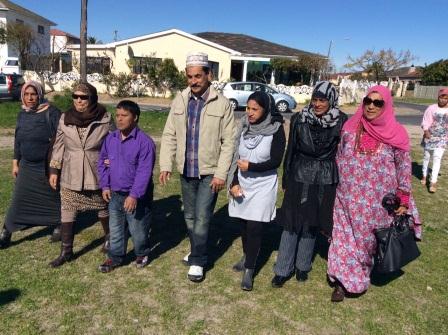 For decades, the Davids family had to stare out of their lounge window and look across the street at the vacant plot of land taken from them during apartheid.
Their struggle finally came to an end on Tuesday when Cape Town Mayor Patricia de Lille handed over the four hectares in Lotus River through a restitution claim lodged in 1996.

The family is still deciding what to do with the property, which has little more than patches of grass and sand. The back of Table Mountain can be seen in the distance.
“It’s sad our parents couldn’t be here to share in this moment of happiness,” said Nazeem Davids, who has led the process on behalf of his siblings.
Their parents Doud and Garaniesa Davids stayed in a nearby corrugated shack and bought the land in 1963.

Doud dreamt of a day when his children could build their houses there.
He used to drive his wife around on a donkey cart so she could sell fruit and flowers on the streets to make ends meet.

Lotus River was declared a Coloured Group Area and he was dispossessed of the land in 1965.
The family eventually managed to buy a modest single-storey home overlooking the land on 6th Avenue.
The children still remember walking across the land to get to school every day.
Doud died in 1980 and his wife made numerous visits to the Commission of Restitution of Land Rights.

On her deathbed, four years ago, she made Nazeem promise to continue fighting until the land was returned to him and his siblings Asa, Abas, Fatima, Faeza, Sharifa, Gadija and Ederoos. They are between 42 and 60 years old.
“If I think about how we were raised, it was difficult growing up and our parents struggled,” Faeza said.
As she spoke, she fingered a weathered wooden frame in her lap. It contains a faded photo of all her siblings taken 36 years ago.

She is happy to finally have the ground back, she said in a whisper while glancing at her lap.
Addressing about 50 people in a marquee on the land, De Lille said the family's story was one of hope. While handing over the land would never wipe away the past, it did bring justice.
“Now that we have handed it over, I think it will take another month or so to get the title deed and I will make sure we will push that as fast as we can,” she told News24 after the ceremony.

The city is paying for the transfer and the lawyer’s fees for the title deed.
“When I became mayor, I looked at all the land restitution claims where the land is owned by the city and I said this land is not owned by us. We need to give it back. And so, bit by bit, in 10 cases already we have given land back to the families.”

De Lille said she wanted land to be returned to people while they were still alive.

More in this category: « Roodepoort Primary: Microcosm of race and leadership issues at schools Stellies Remembers violent Student Riot »
back to top