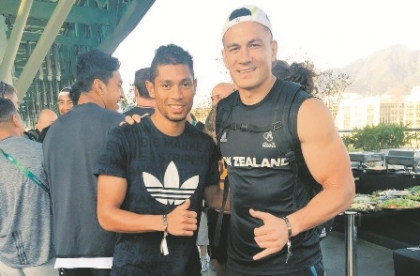 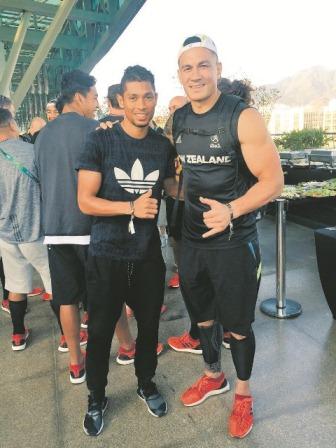 Reddy denied that there was an altercation but said that Van Niekerk broke the rules.

Rapport quoted Reddy as saying: “I do however know that shortly before he won his medal he was addressed because he was wearing adidas clothes. Wayde broke the rules, because for the duration of the Games he belongs to the South African team and not his sponsors adidas. The guys who sponsor the Games pay a lot and then other companies come and take chances. I’m not on social media. I believe it violates your privacy.”

According to Rapport one of Van Niekerk’s team-mates said: “Tubby had harsh words with him and ordered him to remove the photo off Twitter”.

“He (Van Niekerk) was not fazed and refused. We’re not allowed to pose on social media in clothes not provided by SASCOC or the IOC (International Olympic Committee).” 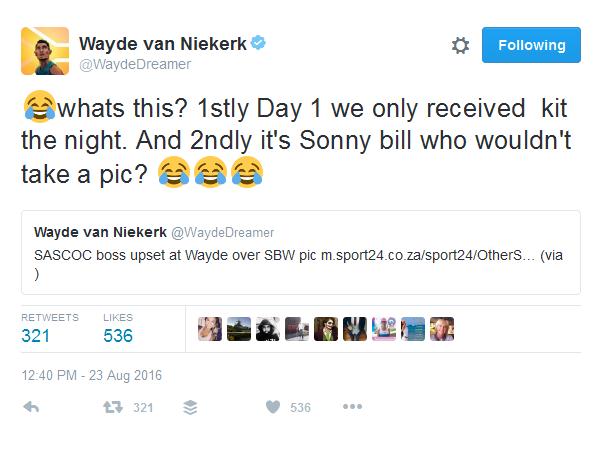 Now the question is... What as van Niekerk supposed to wear?
According to Wayde's Twitter response to a tweet of an article about Reddy's complaint, the team had only received their official kit the evening after the picture was taken: "...whats this? 1stly Day 1 we only received kit the night. And 2ndly it's Sonny bill who wouldn't take a pic?"

Of course we at Bruinou.com know that with both of them being sponsored by Adidas, it was a great publicity opportunity for their sponsor, but still Tubby... What on earth was he supposed to wear if he didn't have his kit yet?
Oh by the way Tubby, we as a nation weren't too happy with that monstrosity which was TeamSA's Ninja Turle x Power Ranger outfit especially since it was not a Proudly South African product

?whats this? 1stly Day 1 we only received kit the night. And 2ndly it's Sonny bill who wouldn't take a pic? ??? https://t.co/Sxn2MMmfdH

More in this category: « A Sporting Legacy - Wayde's Mom Interviewed on Video Uitenhage Twins Representing SA at FINA Swimming World Championships in Canada »
back to top