Comedian Charlie Bruinou is Back With a New Show Featured 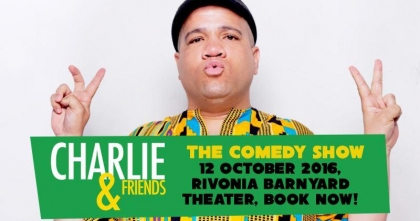 The laaitie who grew up in Sydenham, Durban, spending his teen years in Swaziland and as a young man moving to Cape Town where he got married, started in 2001 what at the time became the biggest social networking website in South Africa and then moved to Jozi where he fitted right in as if he has lived there all his life.

His entire schooling career's report cards are peppered with comments like: “Charles is highly entertaining, with a well-developed sense of humour, he just needs to concentrate...”; “Charles really should settle down and stop being the class clown...”; “Charles provides much amusement and entertainment to his peers BUT...” it's kinda obvious that a calling to comedy is a foregone conclusion.

Charlie's tales of getting married young (22), being a father to a 15 year old daughter while still feeling like a teenage hip-hop hippie himself, being the parent to a severely autistic special needs son and experiencing failure multiple times as a wannabe entrepreneur, makes Charlie's comedy scathingly insightful, sharp, witty, intelligent and ultimately, uplifting and memorable.

Besides being the founder of Bruinou.com and co-writer on all the episodes including the pilot of the 2012 television series Colour TV, Charles has in recent years performed at The Box; Cool Runnings in Melville; on the “Proudly Coloured Comedy” DVD and in various venues across Gauteng and KZN. Now, after a short hiatus, Charlie 'Bruinou' Ash is back on the comedy circuit, bigger, better and louder than ever before.

In the entertainment industry, you gotta have friends and nowhere is this more true than in the zany, emotionally turbulent business of being funny.
“Charlie & Friends” is a comedy show aimed at pulling back the curtains a bit and giving audiences a unique new insight into the comedians they've come to know and love.

Along with comedic heavyweights Donovan Goliath, Dillan Oliphant and Robby Collins, Charles Ash presents a show in which they string their acts together with a hilarious, insightful, soulful narration that takes you behind the curtain and reveals more about the comedian, their backstory and the many challenges they overcame as they threw caution to the wind and followed their dreams to spread laughter.

The funny monologues, interactions and comic skits are interspersed with musical interludes that blends in with the unique style of narration.
The show features the RnB quartet LXG, who with their backing music add even more flavour to the entertainment being dished up buy Charlie & Friends.

When the laughs die down, comedy is serious business. While most people have a very one-dimensional, wholly false perception of how comedians live or behave in their daily lives, the truth is often far more telling than the hilarity of a comedian's on-stage antics.

Like hip-hop music born in the early 80's around street-corner cyphers, before the world was consumed in hip-hop's fireball of raw urban energy (as it is today), comedy is enjoying a similar surge in popularity. But who are these comedians? Where do they come from? What makes them tick? How did they get to where they are and what compels them to go on stage and put themselves at the mercy of unforgiving audiences, night after night, in the determined pursuit of spreading laughter?


Charlie & Friends promises to take the answers to these fairly serious, not-so-funny questions and turn them into even more laughter.

By the end of the show, what will be abundantly clear is that there is no single comedian archetype. Comedians come in all shapes, sizes, colours and ethnicities: some comedians are married (to the game); while some comedians are divorced (from reality); heck, the only truly unifying trait shared by all comedians, is their ability to speak the universal language of “funny” (some more fluently than others of course) and that is what “Charlie and Friends” is all about. A group of friends, all comedians, get together on-stage, sharing, entertaining and showing the audience a bit of the real, authentic side of who they really are... and what comedy really is.