Lêka-Lê Fake Liquor a Danger to Our Communities Featured It increasingly happens that 'wine' by-products are sold illegally as wine in liquor shops. These illegal liquor products are dumped in the most vulnerable and poor communities in SA; communities already experiencing extremely high levels of alcoholism. We also have the highest rates of Foetal Alcohol Syndrome which is when pregnant mothers consume high levels of alcohol leading to their babies not developing properly.

Currently there is a brand of liquor sold in the Western Cape under the name 'Lêka-Lê' and it is sold in a 5 litre plastic bottle at R50 without any certification from the Wine and Spirits Board.
It is in fact not even considered to be a recognised form of liquor.

There have also been occurrences of syndicates in the Western Cape creating fake liquor using fruit flavouring and chemicals such as methanol and containing no natural ingredients with naturally fermented alcohol at all.
The effects of consuming fake liquor is an outright danger to people's health and can even have fatal consequences.

I have contacted the Wine and Spirits Board who in turn informed me that they have referred the matter to the Department of Agriculture for inspection. 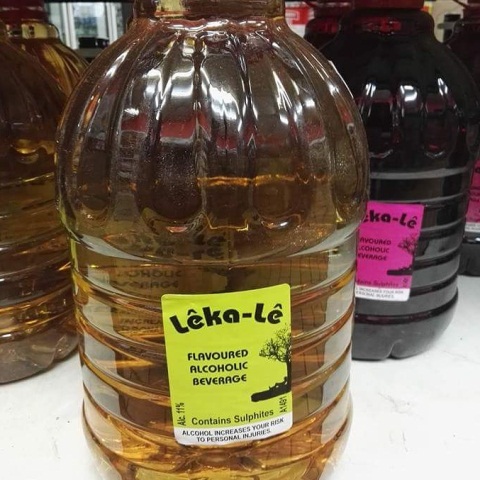 This product which the manufacturer gives the class name “Flavoured Alcoholic Beverage” is sold without a bar code, with no information about the contents, no manufacturer information and that is considered to be illegal.
Another legal requirement is that a class designation code be printed on the label. There is one on the Lêka Lê label but the code A1491 is not a valid code.
According to the Wine and Spirits Board, the code A1491 has been scrapped and a class name “Flavoured Alcoholic Beverage” does not exist.

This is sadly not just a Western Cape issue but a country wide issue and people need to report the sales of these products and we must keep government accountable.

For information on how to report fake liquor products you can Contact the SA Wine & Spirits Board.

0 0
Published in Articles
Tagged under
More in this category: « Turning Stones into Bread – The Bloodhound SSC Project & The People of Mier Kay & Frankie out on a #Bossiekop #Kroesade »
back to top