Seeing the two of them around Cape Town sporting their curly natural hair definitely just proves that what we at Bruinou.com have for a while now been referring to as the #Bossiekop #Kroesade or in other words, a Natural Hair Crusade, is not just a simple fashion fad but for those who embrace it, it has become a lifestyle choice.

We have previously featured Kay Smith in an article which contains a video of her speaking about her hairstyle and how she deals with those who have issues with it.
We just loved how Kay Smith aka Tarryn of 7de Laan Positively Responded to Hair Memes that tried to poke fun at her hairstyle choices.
Oh and seriously... We were the ones who came up with the idea of calling Kay's "Natural Hair Crusade" a #Kroesade and we are absolutely delighted that she still uses the hashtag. 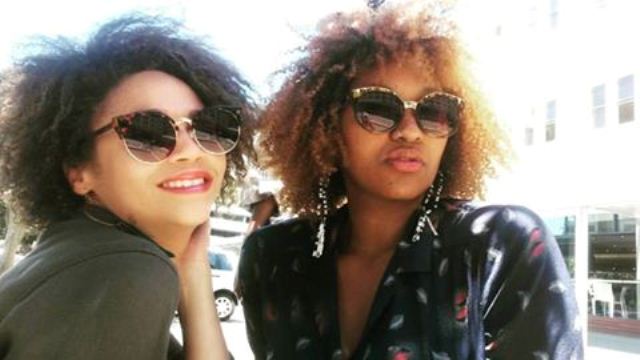 Frankie Herwels who has recently started collaborating with Bruinou.com on some ideas for the future and sometimes graces us with her presence here at BruinouHQ is the founder of the missAnke Jewels brand which is worn by artists in a range of mediums and genres including SAMA winner Claire Phillips and the Hip Hop goddess EJ von Lyrik.
Lately a number of male artists have also been seen wearing her pieces.
This of course leads to more and more members of the general public also becoming interested in her items.

Besides regularly working in front of the cameras in film and photo shoots, Frankie along with her missAnke Jewels brand is becoming increasingly involved behind the scenes with set styling as well as supplying costume jewelery for the productions she works on.
Pieces from her Khoi Couture Collection is currently being worn by cast members of Janine van Rooy's newest production Krotoa van Vandag which we will soon be doing a feature article on.


Janine van Rooy aka Blaq Pearl the musician, singer, poet, rapper, actress, published author and now a playwrite is of course no stranger to our readers and in one of our articles we tell you how to get hold of her book and how Anyone Can Relate to Blaq Pearl's Karadaaa!!!

Oh yes, back to the hair... We here at BruinouHQ really think that both Kay & Frankie are stunning!
We have of course covered the issue of Natural Hair on a few other occasions as well.


Cape Flats author, poet and school teacher Shirmoney Rhoda in her uniquley eloquent and often times hilarious way exlained what it means when people sat that someone is 'Hare Verskrik'.
She looks at some of the perculiarities involving hair and concludes that just because it can be forced to go straight does not mean that it must....


There was also a few years ago when Bruinou.com member HoneyBabe1 wrote her blog  The strand test - how coloured are you?
She was telling us how rediculously obsessed her family was with hair texture and of course we are hoing that the #Bossiekop #Kroesade will have a positive impact on removing that kind of self-hating prejudice which sadly still exists among our people today.


We at bruinou.com are by no means saying that everybody now has to go on a #Bossiekop #Kroesade...
...but sadly we have since our previous articles on the matter heard of ladies born with straight hair wanting to be a part of the hype around having curly hair and then they start chemically treating their naturally straight hair in order to fit in.
Moenie... It is just as damaging as chemically forcing curly hair to be straight.


Thats what the experts say...
Here is my personal opinion and now please don't #kroesify me with accusations of patriarchy or of sexism.
My views stem mostly from my experience working in the fashion industry, my time working as a salon manager, and of course my appreciative eye.
Ja, ja, ja... Ek het al orals gewerk.... Anyways...


Ladies, you are each unique with your own individual hair textures and lengths, so whatever individual styles you chose to go with, try to go with something that enhances that whole package which you were born with.
The world would be a boring place if you all tried to look like each other or if all of you tried to conform to European standards of 'beauty'...


Nature is a talented artist who usually makes really good decisions when deciding what we should look like as an overall package... Try not to mess with it too much and simply find ways to enhance it and bring out the beauty that Nature gave each and every one of you.

0 0
Published in Articles
Tagged under

More in this category: « Lêka-Lê Fake Liquor a Danger to Our Communities
back to top