Whose city is it anyway? Seapoint Promenade Dogs More Welcome Than The Poor Featured 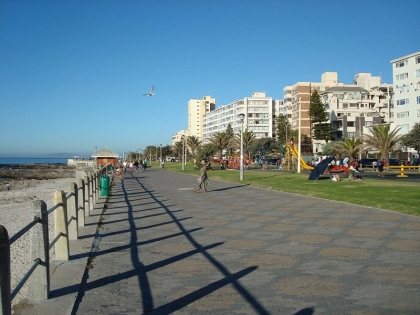 Don't get me wrong... I love my dogs... and when someday, hopefully soon, I own a car again, I would love to take them to dog-friendly public spaces like beaches and parks and of course the Seapoint Promenade. It should however bother all of us that while my dogs would be welcome in those spaces, Cape Town's poor and the homeless are not!

The poor and homeless in our city who are largely descendents of the original Khoisan inhabitants of the spaces now occupied by the wealthy are constantly threatened with being 'eradicated' from public spaces where they often seek shelter.  The City of Cape Town has a track record of errecting barriers, planting spikes or placing sharp rocks in any spaces where homeless people tend to seek shelter. Being homeless has virtually become a crime as finding a place to sleep means you are somehow tresspassing on what technically is a public space.
So once you are homeless then apparently you are no longer a member of the public....


In all likelihood the same kind of people who loudly hail the CEO Sleepout campaign and participate in a range of self-indulgent feel-good exercises that show everyone they care for the poor. are the same people who fiercely want the poor and homeless to be invisible. 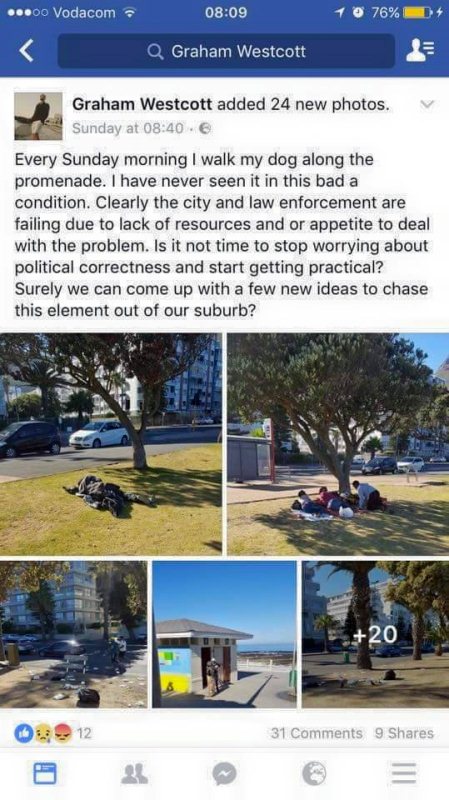 A furore broke out in the past few weeks starting with Seapoint resident Graham Westcott posting a series of photographs on social media of homeless people on the Seapoint Promenade saying that they are a problem and an element that needs to be chased "out of our suburb".
On another occasion Westcott reported a promenade water fountain for dogs which was damaged to the ward councillor Shayne Ramsay and within 15 minutes the councillor responded. 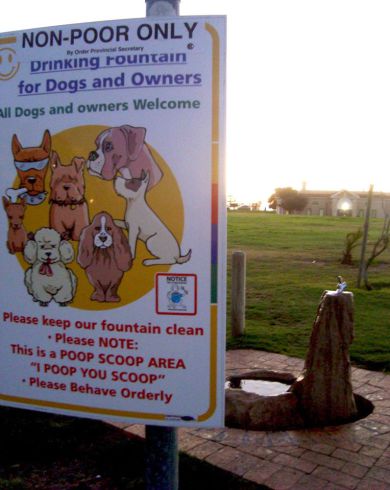 See the 'NON-POOR ONLY' sticker on the sign? There is more about that further below....

Well, I also usually get a quick response when I report damaged infrastructure to the councillor in my town.... Good on him and good on us.
The point I am trying to make is that accordiing to Westcott, dogs being walked on the Promenade should have a functioning water fountain while poor and homeless people should be chased out of 'their' suburb.
Yes of course dogs need water, but geewizz...

Then things escalated when Councillor Shayne Ramsay, whose ear Westcott seems to have, landed herself in some hot water with the broader public and her party leaders eventually distanced themselves from her statements and intended actions.
She was calling on tightening by-laws that would make life even more difficult for the poor and homeless and she had organised a march...

A March??? A "March Against Crime" where they will be "kindly asking anyone planning on sleeping overnight, to move along"?
Of all the things privileged white people can possibly march for she and her followers wanted to march in a bid to ban poor homeless people from 'their' part of the city??? 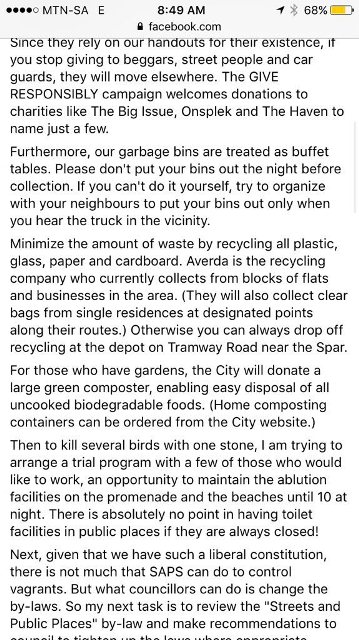 She eventually apologised for her statements and called off the march but...
There is no denying that her apology does not change the sentiments of the likes of Westcott and others who want to preserve their white privilege and continue maintaining the legacy of Apartheid Spatial Planning.

In a campaign to make people aware of the plight of the poor and homeless,  a group of visual artists and activists are placing "NON-POOR ONLY" stickers on signage and structures in places and spaces that are designed to exclude the poor.

In a post on the Xcollective webpage, the context of the "NON-POOR ONLY" campaign is fiurther explained that the sticker campaign is a form of protest to "draw attention to the normalization of Neo- Apartheid discriminatory laws and practices".


"Public signage was the visual and textual markers of exclusion and inclusion that was used on public transport, public amenities, private and state institutions and departments as well as businesses."


"The vaunted dismantling of Apartheid did not however ensure a more equitable society. Social and structural inequalities are now perpetuated through the ‘market-friendly’, neo-liberal policies and trickle-down economics that were part of the negotiated settlement which continues to entrench Apartheid era spatial and economic divides and serves to exacerbate and reinforce the exclusion of the majority of citizens through the public private partnerships entered into between municipalities and improvement district projects funded by local businesses which effectively further criminalizes the poor through profiling and private security surveillance and patrols." 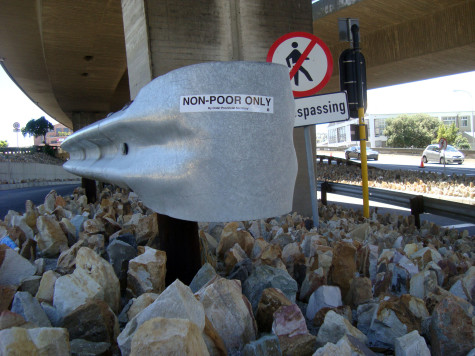 People often quote Mahatma Ghandi as having said: "The greatness of a nation can be judged by the way its animals are treated."
I am not going to bother verifying whether those were verbatim his exact words, because the point is that the interpretation of the quote should be based on the assumption that the most vulnerable people in a society are treated better than animals.