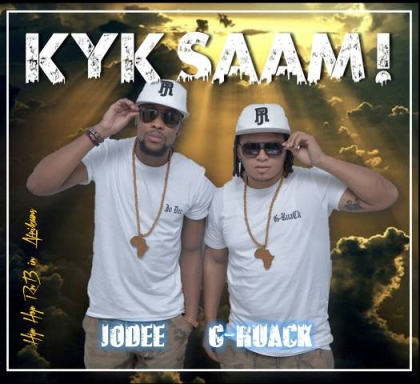 Om te sê dat die twee manne van Springbok, Namaqualand in die Noord-Kaap nog groot dinge in die musiekbedryf gaan doen is 'n under-statement.
They are already having a huge impact on audiences all over the Northern Cape and have started doing live performances in quite a few other parts of the country as well.

We got a shout from someone who we regard as a living legend in the South African music industry. He wanted to set up a visit for the group to our #BruinouHQ when they were doing a quick stop-over for business in the Cape Peninsula.
He didn't have to say much about them... We immediately knew that this must be something big because this man only gets excited about an artist or group if they have what it takes to completely blow away whatever else is out there or at least add a new dimension to the industry.
To give you some perspective, the man who called us, best known in Gospel Music circles locally and internationally, Simon Seekoei's influence and caliber is such that at a 2014 concert in Atlantis, he shared the stage with none other than the world-renowned Jonathan Butler. He is cited by many successful South African Gospel and secular music artists as someone who influenced their careers. 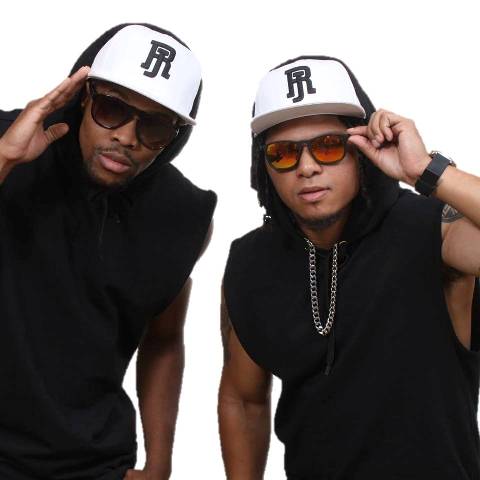 JoDee & G-Ruack who also go by the name RJ Entertainment, have been making music together since 2008 but then Ruack left South Africa for six years to study Sport Science in Cuba.
While Ruack lived in Cuba, as is the nature with any artist, he became involved with the music and Hip Hop scene in Havana.
His impact on the Cuban scene was so huge that he became involved in the development and launching of new TV programs aimed at the youth in Cuba.
Besides that JoDee & G-Ruack are primarily an Afrikaans act who are both able to very fluently and comfortably flow in English, Ruack is also fluent in Spanish. Having only returned to South Africa in 2015, he admits that he sometimes still thinks in Spanish.

Meanwhile JoDee was also putting in the work back home; building a fairly successful career as a member of a band as well as doing gigs as a solo artist until late 2015 when the two of them got back together.
Through their seperation they have grown individually and this meant they were now able to add so much more to making their group successful.

The titel of their debut album is "Kyk Saam" which means to 'supporty each other'; 'combine your efforts'; combine your resources', is not just a description of who they are and what they do as a group, but is also a direct appeal that goes out to different segments of the their audience.
The titel track is indeed an appeal directed at parents and adults in the community to 'kyk saam' with their children and not to break them down in the areas of their lives where they need them the most.

When we say that they display a wide range of versatality in their style of delivery and the 'flavour' of their beats we are not saying that it  is a mish-mash 'deurmekaarspul' but that there is a well-coordinated diversity in the styles & vibes of the tracks selected for the album.
There is also a recognisable and overriding overall feel throughout the album whether a track is a hard-hitting Boom Bap style, a New School beat, a really fun Reggaeton style or even a Ballad.
They have still not officially released a single but that is in the pipeline soon and Bruinou.com will be bringing you that news as soon as it breaks. However if you read on further below, we have a free track for you from RJ Entertainment on #BruinouNumberz.

With JoDee holding down strong melodies and harmonies tied to the versatile flow in Ruack's rap style on the music created by William Koopman, the overall quality of the album is also a result of the effort put into the recording, engineering as well as the final mixing and masteringdone at Homeza Records.

That is where Simon Seekoei along with his son Marvin Seekoei of Homeza Records come in. Marvin who is no stranger to the Bruinou.com pages was a member of the very influential Hip Hop group Suburban Menace and he in fact is the original Cow in Mobcow Records. 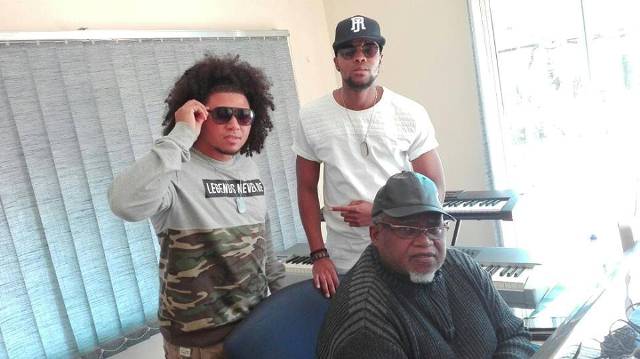 We asked Simon Seekoei what it was that made him realise that Jodee & G-Ruack are the real deal.
"Man, when I met Ruack I was very impressed with his go-getting manner. He was intellectual in a way that young people can relate to."
"My son Marvin did the actual recording and I mixed and mastered ...but everytime they were finished and he back-played the tracks for me, I realised that the recording of this album was history in the making."

"They make hiphop even acceptable to church people. They have a real message in their music."
"Also, them being from Namaqualand with their mastery of the Afrikaans language gives an authenticity to the album. They don't sing and rap in Afrikaans because they suddenly realised that there is a commercial value to it. They do it because it is who they are."
"Buying this album is buying history in the making."

One of the standout tracks for us is the second track on the album "Myself" in a New School style, (no, with New School we do not mean Trap).
With the lyrics "Jy sal my vat vir wie ek is... So klim op die bus... Voor jy die ride gaan mis" as its hook, the song is about a guy who is starting to build a future and though he isn't there yet,  and even though he can't yet give her everything she wants, the girl has to make up her mind whether she want to get on board.

Driven by a strong piano melody on slow boom bap rhythm, the ninth track 'Vat My Hand' is about reaching out to a friend who is down and out and asking for forgiveness that you were not there when they first needed you but that you are there now and you want them to take your hand.

Besides what the other folks here at #BruinouHQ agree on, when we listen to the Kyk Saam album, I am also very much intrigued by one particular track. There is the really beautiful alm,ost minimalist, ballad "Ek en Jy".
The vocal melodies by JoDee in what can only be described as a 1990's Boy Band style are at first in the background and later take front and centre for his own 'verse'. The track however is started off with and has as its main focus an utterly romantic spoken-word ode delivered by Ruack in Afrikaans & Spanish.
Ja, Afrikaans en Spaans... What a unique concept it is to use the two languages in a love song.
Ummmm... Mind you... I am yet to play this song to a lady...

Oh pardon me... Almost got lost there for a second...

Though they do not have an official music video as yet, there have actually been some interviews and a few short clips of their performances broadcast on SABC TV.
We have seen some amateur footage of JoDee & G-Ruack performing at different venues and their performances are on point.

Sadly none of the amateur videos are of a decent quality to upload to this article but we can promise you that their performances all consistently seem well-polished and that their stage presence and crowd interaction is top notch.
We are waiting on news about when they will be releasing their first official video and more importantly we will be among the first to bring you the news of when they have their first big live performances in Cape Town and Jozi. 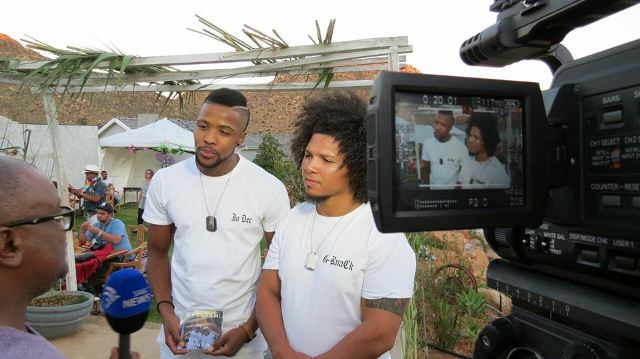 RJ Entertainment's Ruack & Jodee have struck a really good balance with Kyk Saam.. While dropping inspirational lyrics that speak to the issues that not only our youth but many of our adults face they have managed to throw in some genuinely fun tracks as well.
Almost every time we play the album at #BruinouHQ we start a little discussion about which track we think will be the track they will be releasing as the first single...
Though obviously, as with any album, not all of the tracks can qualify to be considered for the position of being our outright favourite, we are having a difficult time deciding which one is, and there genuinely are no weak tracks on the album.

Simon Seekoei is absolutely right and with every listen we realise more and and more...
Die ouens met hul alsomvattende focus op kwalitiet is besig om geskiedenis te maak.
The album Kyk Saam is only available as a 12 track CD hard copy which sells for only R100.
There are a few stockists in the Northern Cape, including the Spar Supermarket in Springbok and until there are stockists in other parts of the country, you can purchase the CD directly from RJ Entertainment and arrange with them what delivery option suits you best.

To be a part of the history these two guys are making, email them on This email address is being protected from spambots. You need JavaScript enabled to view it. or...
You can contact them on 074 043 8420 or 084 883 0481
Jy kan hulle ook op hul G-Ruack JoDee Facebook Profiel kry.


To give give you guys an idea of their versatility JoDee & G-Ruack are giving you one of their R&B songs which is not on the album.
One Hundred Percent is however not like any of the tracks on the album...
It has that feel reminiscent of groups like Jodeci and KC & JoJo, and it has the lyrics to match.
Stream or Download JoDee & G-Ruack - One Hundred Percent for FREE on #BruinouNumberz.

More in this category: « SADA |AOKHOEN !NOMAN - Diverse Genres on Line-up of KSAAG's 2nd Annual Choir Tour from Namibia Manchester United vs Liverpool - A Comedic Look at The Rivalry on The Streets of Cape Town »
back to top