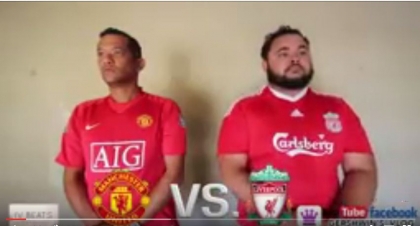 Nowhere outside of England is the rivalry between fans of Manchester United and Liverpool football clubs as big as it is in Cape Town.
Both teams have official Cape Town supporters clubs endorsed by the clubs in England and whether you love it or hate it, its everywhere and you can't ignore it.

Instead of being all serious and investigating the psychology behind why so many South Africans, particularly Capetonians, take English football so seriously, the hilarious duo of Ivan Willis and Gershwin Williams decided to poke some fun at the phenomenon.


Ahead of the big match between the two English Premeir League sides on Sunday 15 January, each respectively backing one of the two teams, Ivan & Gershwin took to the streets of The Mother City and polled the fans inbetween skits that demonstrate their own personal rivalry.

WATCH: Manchester United VS Liverpool F.C. - The Streets of Cape Town what the People had to say.

More in this category: « JoDee & G-Ruack Kyk Saam Soli Philander Returns to The Stage with Nice Coat / Lekker Jas »
back to top