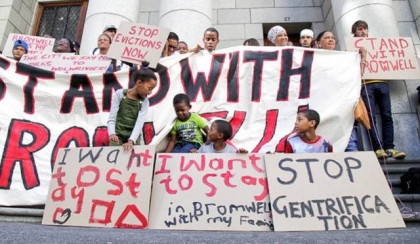 A judge in the Cape Town High Court on Tuesday displayed utter arrogance and such a blatant lack of empathy with a complete disregard for the poor that it raises concerns about how our judicial system is still frought with systemic racism.
Irrespective of the merits of the case, his attitude continues to uphold and is in fact a manifestation of the Systemic & Structural Racism which we need to eradicate.

In his spate of remarks, Judge Leslie Weinkove shows that he clearly has no clue or simply chooses to ignore the impact which Systemic & Structural Racism has on the majority of South Africa's population especially the poor who are being displaced in the case he is presiding over.

On Tuesday 31 January the application of 27 people due to be evicted from Bromwell Street Woodstock houses came before court to challenge the City of Cape Town's plans to relocate them to temporary emergency accommodation at Wolwerivier Farm, 28.2km outside the city.
We all know that Temporay Relocation in Cape Town which itself usually follows a process of Apartheid-styled forced removals has never really been temporary as those who have been forced to move to places like Blikkiesdorp can attest.

In her article on News24, Jenni Evans reveals the shocking statements from the judge which stunned the applicants as well as those in the gallery.

Cape Town - Tensions ran high in the Western Cape High Court on Tuesday when evicted Bromwell Street residents shouted at the judge while court was still in session after he questioned their spokesperson's knowledge on the matter.

The 27 residents are challenging the City of Cape Town's plan to relocate them after they were evicted from houses in Woodstock's Bromwell Street, which were sold for development.

The residents and their supporters regard the removals as a new form of apartheid-style forced removals, in favour of developers cashing in on demand for rental units close to the inner city.

They have also accused developers of being part of the trend to "gentrify" old working class areas to the point where few original residents can afford to live there.

Click Here to Continue Reading The Full Article on News24

For a Comparative Image of what a "Temporary Relocation Area"  like Wolwerivier Farm is, below is a picture of Blikkiesdorp - It is virtually a concentration camp. 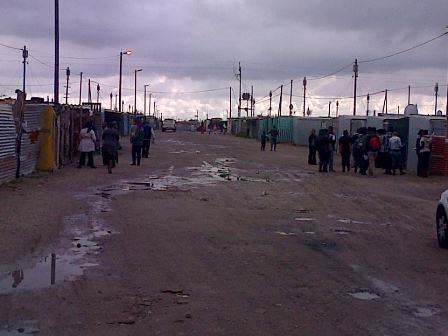 More in this category: « Smoking is Deadly for Coloured People Book to be Updated after 'Vat-en-Sit' Racial Stereotyping of Coloured Culture Caused Outrage »
back to top