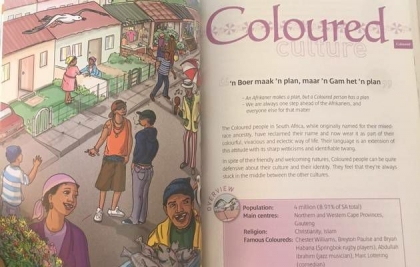 There I was, enjoying my Sunday morning, reading about corruption, SONA17 and yesterday's soccer match at Loftus, when the below gem on Coloured culture caught my eye.
I read through the first few lines, and nearly choked on my coffee!!


Apparently the practice of "vat en sit" is part of Coloured culture. This is according to a white female author Paula Marais who "verified" this little tit bit after interviewing members of the community.

An extract from her book Rainbow Nation Navigation reads as follows.
“There’s a little (unacceptable) thing called ‘vat en sit’‚ which refers to a man moving in with his girlfriend and‚ often‚ letting her pay for his expenses. In some cases the girlfriend falls pregnant. She then returns to her mother and makes peace with her (usually by apologising). The girlfriend moves back in with her and then has the child‚ She then leaves the child with the mother and returns to the boyfriend.”

A report on Times Live shows the outrage on Twitter and other social media.

Click here to view the article on Times Live.


The offensive book started drawing public attention after Twitter user Deirdre @KlapperOlieAfro tweeted about it and others latched on. 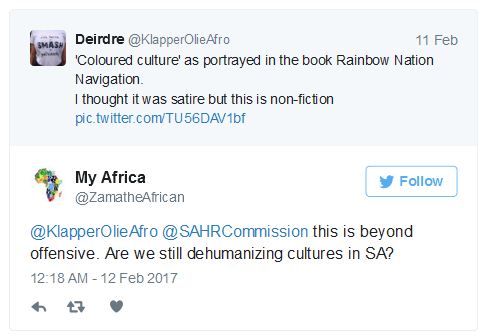 A petition was started on the Amandla Awethu website by Jacqlyne Titus where she made a statement denouncing the derogatory nature of Paula Marais book.
"The information, particularly about Coloured people in South Africa is defamatory and racist. The information is ill informed and dangerous in creating assumptions about millions of South Africans. The publisher Paula Marais has taken no responsibility for the chapter by saying other people wrote it and it was verified by people of "that" culture, further exposing her attitude towards accountability."

Cick her to View the Petition

BOOK TO BE UPDATED AFTER OUTRAGE

On Sunday Paula Marais and her publishers Logogog told Times Live that the book will be be updated.
We at bruinou.com are certainly happy that the social media uproar has had enough of an impact to get them  to removce the offensive content and update it with a more balanced view.


A seemingly repentant Paula Marais told Times Live: “I guess the only positive thing I can say about this experience is that we are opening dialogue‚ which can help us learn about each other‚ which is what we wanted to do. I can only apologise on behalf of all the contributors."

Click Here to view the article on Times Live saying Rainbow Nation Navigation book is to be updated.

More in this category: « Cape Town Judge Mocks The Poor with Disregard for The Effects of Systemic Racism in Bromwell Street Case Cape Town High(?) Court Judgement Decriminalises Dagga »
back to top