She was seven years old when her dad already knew what we are all now discovering.
Celest Schoemans' father knew then that his daughter is destined to be a star.

That she is Super Talented and will continue to gain in popularity is no doubt a fact, but we at Bruinou.com also found her to be really charming and delightful and those  endearing features are what will gain her many more fans.

Born and raised in Strandfontein, Cape Town, and proudly telling us that she still resides there, Celest recalled the first time her dad coaxed her into singing in front of an audience.
"I was about seven years old. I very nervously sang a song at my Grandmothers birthday celebration"
Her dad immediately took it a step further than simply having his daughter sing at family gatherings.
"Thereafter he would bribe me by paying me to sing at Karaoke's"
"At was at the age of 13 that for the first time I really took to a proper stage to sing"
"It was there that I fully realised it was something I really loved doing."

Asking Celest who the people are that shaped her life, her career and who and what it is that motivates her, there is a tangible sense of positive pride in her reply. Her family is really important to Celest.
"My family always pushed me to do what I love no matter how daunting and different it may have been."
"However my dad was definitely like the 'ballet mom'. He drove me to every gig, sorted out my music, and also saw to it that I was paid what was due to me."

"Then there is my daughter; nobody ever told me you could love a little human in this manner & that they could make you want to be Better."
"Everything I do, I do with her at heart. I really want her to look back and be proud of me and my achievements."

"She has really taken to the arts as well so my ultimate goal is to show her that the arts Is A Real Job and it’s not impossible to make a living off doing what you love."


The technical strength of Celest's vocal delivery and her string of achievements she has racked up over the years, belie the fact that she has had absolutely no formal training.
We of course wanted to know what her secret is; if she had any strict practice regimen.
It turns out that there is none.
"I am very blessed that my ability is a natural one, so other than vocal warm ups and singing different kinds of music I don't really have any formal training regimen."
There is however no doubt that she has through the years been working on honing her talent in ways that she might not consider to be training.

So you might be wondering why we are making a fuss about her when she's still doing cover versions and hasn't had a 'hit' of her own yet...
In a world where any person who has no experience performing but believes that because they have the ability, a microphone and a computer in the bedroom, they can write and record a song in the morning and on the same day post it on the internet, hoping it will make them a star, it is not surprising how much mediocrity music lovers are often subjected to.
We have seen it proven time and time again with most genres that if an artist first concentrates on the building blocks of developing a solid live performance, the chances of them creating magic in studio is exponentially higher.
Yes, there are a few gems that would not have made it into the limelight if they didn't go the instant bedroom studio route, but thankfully that is not the route that Celest has followed. 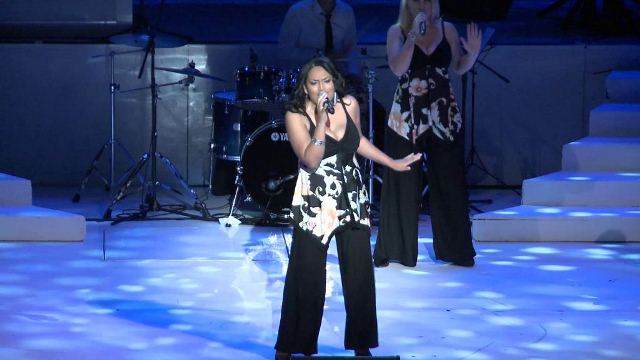 CELEST HAS PAID HER DUES
Taking to the stage at the age of 13, Celest who now at 28 years old is a seasoned live performer started winning talent competitions by the next year.
At the age of 14 she won both "The Westgate Mall Voice Search" in Mitchell's Plain which at the time was quite popular and got a fair amount of national media coverage as well as the "Teen Idols" competition which was hosted at the Joseph Stone Auditorium in Athlone.

"At 17 I won a competition at the Artscape Opera House called "Die Huisgenoot Tiener Talent Kompetisie."
"Part of the prize was getting to perform at "Die Kaapse Jol" which was held at the Bellville Velodrome.
"There I performed alongside Loyiso Bala, Bobby Van Jaarsveld, Brandon October and Nia Nel, just to name a few of the many great artists who were on the bill."

The year 2010 saw another huge highlight for Celest in her continuingly growing career as a performer.
"When South Africa won the bid for the FIFA world Cup, I had the privilege of performing at the official celebration gala event at the Spier Wine Estate where I got to meet Mr. Sepp Blatter."
"Those are some of my fondest memories."

Still, Celest was not yet well-known to the public and she is yet to release an album or a single as a solo artist performing original compositions.
Working with singer, songwriter and producer Jon-E of MuzicTone Entertainment, Celest has suddenly shot into the limelight and endeared herself to music lover's hearts after videos of her doing cover versions of popular songs were widely shared on social media through her Facebook page Celest - #TheVocalist.
One particular song is a duet performed by Celest & Jon-E covering the Little Mix & Jason Derulo ballad "Secret Love Song"

After many years paying her dues regularly performing on the live stage and having had smaller but regular following built up over many years, in our conversations with Celest one thing became abundantly clear; She has her feet planted firmly on the ground and all the sudden extra attention won't go to her head.
Celest is very active in the community she so proudly calls home and is currently working on launching new projects with the Proudly Strandfontein program.

We of course had to ask Celest what she does to chill, unwind and take a break.
No, it wasn't a trick question, but I'm sure she must have thought I'm being silly as she replied: "It's extremely crazy. This job really does not allow for breaks. Like for example when it comes to the festive season and everyone is going on holiday; that is our busiest season".
"However, I do love going to any place where I can have a good swim. That is really my form of relaxation."

Celest listens to everything from Pop, RnB to Country, Rock and even Jazz.
"I appreciate all types of music. My favourites are definitely Pop and RnB."
"There is nothing like a good RnB Love Song.

Now when it comes to people who mostly sing beautiful RnB love songs and ballads, with the odd up-tempo pop song thrown in here and there, we generally tend to think of them as some really serious individuals... but...

"I love laughing. It's good for the soul".
"I love comedy. A few weeks ago I went to see Marc Lottering whom I adore...  I think I half wet myself" she gleefully said.
"I also love doing silly stuff like the video Jon-E and I did this past Friday."
Celest & Jon-E made a silly little video snippet of them singing along to the hit song 24K basically just to wish everyone a great weekend.
She went on to tell us how much she loves The Big Bang Theory and Phil Dunphy in Modern Family.

There must of course also be someone she is close to who tickles her funny bone.
"I love most of my daughter's tantrums. She's hilarious!" she blurted out.
Before we could even ask her what she meant by 'tantrums' she continued: "I know its silly stuff. I'm all about those 'don't take life so seriously' vibes. We eventually had to get around to what all of us want to know.
What does the not too distant future hold for Celest Schoeman?
"For the year going forward I am now at the moment working on releasing my first single and doing my first solo show."
We also know that besides working with her producer Jon-E on new original material, Celest is keen on working alongside some of our local artists and is open to suggestions for collaborations with musicians as well as professional songwriters.

Her planned solo show aside, Celest's bookings roster is also starting to fill up for the year 2017.
"I will also be at a number of other events like The Natural Hair Festival which is in Johannesburg during April."
"Then there is The Kalahari Desert festival in September and a production called Boogie-Licious at the ArtCape Opera House in November.
Bruinou.com attended the Kalahari Festival in 2016 and we know that Celest will be in the company of quite a few high calibre artists in the star-studded line-up which the Kalahari Desert Festival is renowned for.
There will definitely be more prominent gigs to be anounced soon as promoters line up to book her.

Celest will soon be releasing the dates for her solo show and besides that she will be keeping Bruinou.com in the loop with all of her next moves, you can follow her on social media to stay up to date with everything she is doing.

LISTEN TO CELEST SHOEMAN ON SOUNDCLOUD

For Bookings and Entertainment Industry Related Enquiries email This email address is being protected from spambots. You need JavaScript enabled to view it.