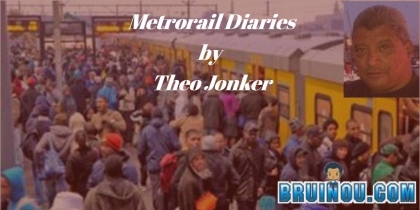 Amongst all the choas with commuters ransacking stations because of train cancellations, now there are rumours that Metrorail workers are planning to strike.
I thought that they are always on strike and have been striking ever since I can remember. Let's hope that it's just a rumour...
The ticket-verifier at the turnstile stands with her hands in her pockets, the collar of her jacket turned upwards and her head covered in a beany.
She yawns as she gleans over my ticket. I'm not sure whether her eyes are open. I’m not even sure if she is registering the information on the ticket.

“What happens now that some commuters have decided to strike back?” I think to myself as we wait on the train, but things with Metrorail look surprisingly normal this winter morning and even the weather is also clearing up.
A group of ladies in their early 20's gather on the platform oozing fresh morning energy and vibrancy paying no attention to the crispness still in the air.
Their conversation is hyped and animated.

“Oooh... We have this new manager at work. His walk, his talk is to die for” the youngest of the five says with the admiration in her voice clearly evident.
“Oh are you referring to Liam?” the chubby young lady in the group enquires.
“Yes that's him” the younger one replies with her eyes lighting up.
“He's taken” one of the ladies snubs.
The group is momentarily enveloped by silence.

“I don't believe it. I don’t wanna hear that” the young lady says disappointed.
“What do you mean ‘taken’ by the way?" she fires again.
“He’s seeing that lady who is in charge of Quality Control. She was instrumental in getting him a job at the company” the chubby one informs the group all listening on, again in complete silence.
“I thought she’s married. I saw a guy picking her up after work” the youngest lady breaks the silence almost as if she is asking for confirmation.

The train announces its arrival with a siren screaming in the distance.
We jump on board facing a new day while the ladies are still chirping and they are still on the topic of the hunk at work.
“I wanted to chise that guy but you dropping dowwe trappe girl.”
“What kind with you eksê?” the younger girl exclaims complete with exaggerated hand gestures and body movements.

The rest of the ladies giggle in amusement for her sudden use of Cape Flats slang, which they are probably not exposed to on a regular basis.
“It can be tough being the new guy but sometimes it can also be great.” I think to myself.
It seems like Liam will have his hands full today.

chise          An Afrikaaps word which in this specific instance means to “chat up” and “flirt with” somebody for romantic  intentions.
To “romantically interact” with somebody.
It can also simply mean to “talk to somebody”.
The word also has several other meanings dependent on the contexts it is used in. It can even mean to “leave”.

dowwe trappe         Directly translated from Afrikaans it means “dull steps” and it is plural for “dowwe trap”.
In Cape Flats slang or Afrikaaps it refers to an action, an idea or advice that is not in your own interest, in someone else’s interest or the interest of those who are with you.
It means it is an “uncool thing” to do or say or a “buzz kill”.

“What kind with you eksê?”
“What is up with you, if you know what I mean?”

Metrorail Diaries has finally returned to Bruinou.com with the kind permission of Theo Jonker & FunDza who are now the official publishers of Theo Jonker's series of short stories (Edited by Ryan Swano) which now bear the title Metrorail Mondays on FunDza.

Take ‘Funda’ the isiXhosa word for ‘to read’ or ‘to learn’.
Add a ‘Z’ for our beautiful country: Za
And you get – FUN, READING and SOUTH AFRICA – FUNDZA!

That’s what FunDza is all about: getting teens and young adult South Africans reading for pleasure – and loving it!

More in this category: « Metrorail Diaries - Cheese It and Enjoy It Terug Na Toeka »
back to top