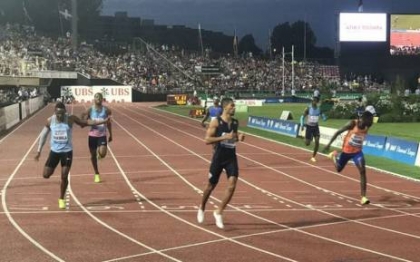 Wayde van Niekerk cruised to victory in his first serious 400m race in Lausanne on Thursday night as he grabbed his second world lead.
The Olympic champion even slowed before crossing the line‚ but he still stopped the clock on 43.62sec‚ a record for this Diamond League meet and a time faster than any active athlete in the world.
Only four other men in history have been quicker‚ including American Michael Johnson‚ who had held t previous 43.66 meet record.

Van Niekerk really looked like he was taking it easy. He started slow by comparison‚ and he wasn’t even in the lead when he entered the home straight‚ trailing Isaac Makwala of Botswana.
But he put his foot down to storm into the lead before easing up before the finish.


Click here to watch the race on BruinouTV if above player does not open in your browser.

After winning the 300m race last week, smashing another another Michael Johnson record, Wayde van Niekerk now holds the unique disdtinction of being the only sprinter in history to have run faster than 10 seconds for 100m, 20 seconds for 200m, 44 seconds for 400m, and 30.85 seconds in the 300m. He ran the 300m at a time of 30.81 seconds.

Few people are likely to bet against Van Niekerk‚ who also has the 200m world lead‚ when he doubles in the 200m and 400m at the world championships in London next month.

Check out our previous Wayde van Niekerk articles below.

More in this category: « Uitenhage Twins Representing SA at FINA Swimming World Championships in Canada Brandon Benjamin, the first POC to be crowned SA Surfing Champion battles to get sponsorship »
back to top