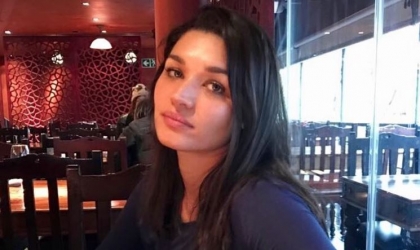 Make no mistake. This is Huge! ...but Kim Engelbrecht is not simply a "flash-in-the-pan" actress who just happened to get lucky.
Kim has come a long way having spent more than two decades building a solid career in the entertainment industry.
Being cast as The Mechanic in the hit US TV superhero series The Flash is affirmation of how immensely talented Kim really is.

When she landed her first feature film role at the age of 13 playing Sarah Gadalla Gubara in the 1994 movie Sarahsarà, Kim Egelbrech was still completely unknown to South African television viewers.
The girl from Belhar on the Cape Flats however soon became a household name when in 1998 she landed the role of Lolly de Klerk in the Isidingo TV series.
By the year 2000 Kim had permanently moved to Johannesburg because as she once put it, "Egoliwood" was where she needed to be in order to become a star.
She firmly solidified her position as the new sensation on South African television when she became a presenter on Take 5 and later on Craz-e, both magazine programs aimed at teens.

The actress again commanded our attention and the attention of the rest of the world in 2004 with her second feature film role as Nancy in Boy Called Twist; the gritty present-day Cape Town interpretation of the Charles Dickens classic Oliver Twist.

.
There have been quite a few local and international starring and supporting roles in TV series and films since then.
We also got to see her display some great comedic skills in the laugh-a-minute Bunny Chow with South African comedy greats Joey Rasdien, Kagiso Lediga, David Kibuuka and Jason Cope.

Steadily she has been building a career as a versatile actress, TV presenter and Events MC.

We at Bruinou.com are wondering what level of physical action Kim will be displaying in her new role, if any, since we know that Kim is and has always been sports crazy, having actively played hockey and badminton, and that besides her acting skills, she was in fact also cast for her role in Sarahsarà because of her exceptional swimming skills.

Kim recently jetted off to Vancouver Canada to join the cast of The Flash. It was announced last weekend at the 2017 international Comic-Con in San Diego that Kim and fellow South African Neil Sandilands have both joined the series' fourth season.

Speaking to Times Live TshisaLIVE from Vancouver, Kim said she was excited to have joined the star-studded cast.

"I am really excited to be in The Flash, as it is a series which I have followed and liked for some time. It’s also exciting to be working in Vancouver for the first time, and to be working with such great actors," she said.

Kim explained that she had auditioned for the series and was later told to jet to Canada as soon as possible to start shooting.

"I was asked to audition for the part in The Flash, and after the audition they requested my showreel. Approximately a week later, I got the call that I had to get to Vancouver as soon as possible to start shooting, and that’s where I am now," she explained.

The Flash TV series centres on scientist Barry Allen who acquires super speed through a freak accident and becomes known as the Fastest Man Alive. The Flash has an impressive rating of 94% on the review aggregator website, Rotten Tomatoes.
Season Four of The Flash starts airing in the US in October 2017.

1 0
Published in Entertainment News
Tagged under