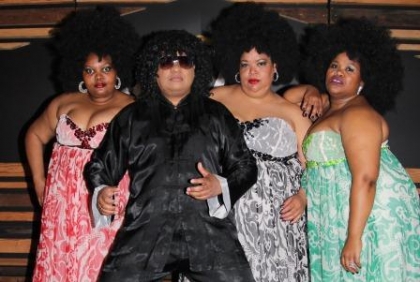 When 3 Tons of Fun was formed 10 years ago, they truly broke the stereotype that only slender women can be sexy and they affirmed that fuller-bodied females can also successfully grace stages as artists and consistently remain popular with audiences. Their success calls for a big celebration and they are doing it in style on 9 September 2017.

Since their inception 3 Tons of Fun have emerged as one of South Africa’s most loved all female groups becoming synonymous with explosive parties and great fun performing locally and all over the world.

Saxy Sthe, Beautiful Bee and Mysterious Michelle have an incredible rapport together on stage and no matter what the occasion they can get the audience on their feet.
They are in great demand on the local and international corporate circuit as well as major festivals.

Celebrating their 10th anniversary they are collaborating with Uncle Cal, the quintessential Afro Ninja DJ in his kung fu outfit, curly disco afro and space-age sunglasses.
Uncle has graced the stages of many major festivals including Suidooster Fees, Klein Karoo Nasionale Kunste Fees (KKNK), Cape Town International Jazz Festival Free Concert and Jazz on The Rocks among many others.

3 Tons of Fun will also be joined by a few live musicians to perform popular cover songs as well as originals from their debut album, Larger Than Life, released in 2015.

Besides one or two of their original songs you can expect to see them perform homebrewed sounds like the hits of Miriam Makeba, international classics such as A medley of hits by Gloria Gaynor, Dancing Queen by ABBA, It’s Raining Men by The Weather Girls and contemporary hits like You Put My Love on Top by Beyonce, Me Too by Meghan Trainor plus many more sing along favourites.

The audience can also expect a list of vibrant guest artists to  join them on stage to be part of the celebrations so you can look forward to an exciting line up and a show with a melting pot of genres.

WATCH: 3 Tons of Fun Performing Jump by The Pointer Sisters

The 3 Tons of Fun 10th Anniversary Celebration is taking place on Saturday  9 September at The Barnyard Theatre at Willowbridge in Tygervalley from 13h30 and will be filmed for a live DVD which will be made available at a later stage.

You can Win Yourself a Set of Double Tickets to be part of the audience and who knows, the camera might also just land on you as this show will be a Live Performance DVD Recording.

When you share the facebook post, it has to be Public on your time line so that We Can See It.
We will judge who has The Most Creative and/or The Most Effective Shares.

The Judges' Decision Will Be Final ...so moenie nog try om te argue agterna nie.
Ticket Winners attend the event at their own risk as if they had bought the tickets like any other attendee. 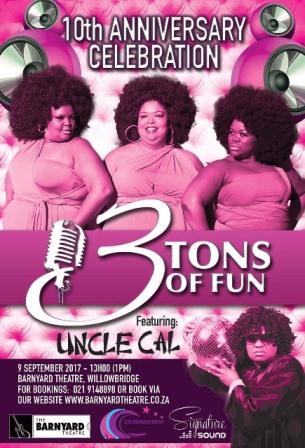