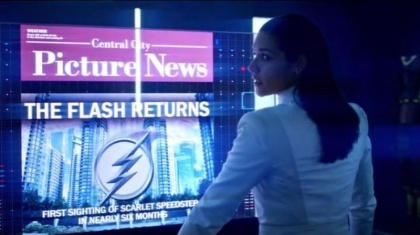 On a quick visit home to South Africa, in between filming episodes of The Flash in her role as The Mechanic, Kim Engelbrecht revealed a little more about the character she plays and about  her experience of filming in Canada.
The Mechanic is the devoted assistant to “The Flash” Season 4 nemisis The Thinker, but the actress said that her character isn’t entirely evil.
“I know she’s not a good girl, but I think there are certain positive qualities about her,” Engelbrecht told Channel 24. “There’s a running kind of feel with the show where there’s good versus evil, and maybe she’s got a little bit of good in her.”
Described as an extremely intelligent engineer, The Mechanic designs devices for The Thinker (Neil Sandilands), aka Clifford DeVoe. “In Season 4, the fastest man alive (Grant Gustin) is being pitted up against the fastest mind alive.
"My character is the engineer to The Thinker. So whatever he thinks up she then builds,” Engelbrecht said. Engelbrecht also admitted that she’s actually nervous to see how her character would be received by the American and other international viewers.
“I don't know how I will be received. I hope that they like my character, but I will just take it as it comes,” Engelbrecht told Times LIVE. “I am coming into a show that is the biggest on its network and is already on its fourth season. It has a huge fan base and that comes with a huge amount of pressure. I understand that it is a big show; that it is a big deal for South Africa, so I just really want to do well.”
In our previous article about Kim landing a role in The Flash we said it wasn't simply a case of her being lucky but that the actress has paid her dues over the span of a more than 20 year long career.

Being cast as The Mechanic in the hit US TV superhero series The Flash is affirmation of how immensely talented Kim really is.
You can read more about how she got to that stage of her career in our article 'Kim Engelbrecht Lands New Role in The Flash'. The 37 year old actres immediately said "Jetlag" when asked what the most challenging thng was about playing The Mechanic.
She carried on to say: "I work in Canada so I leave again on Saturday (Oct 7) and then I film the next episode, but the most difficult I think is just me realizing the magnitude of the show and just being comfortable with myself and doing a really good job. But there’s no real hurdles, it’s been really exciting and just a complete blessing.”
Though Kim Engelbrecht told Channel 24 that if given a choice of portraying a superhero, she would like to play the role of Wonder Woman, we at Bruinou.com hope that someday Kim gets handed a brilliant script where she gets to star as an all new superhero in her own series or movie that will dominate the genre. “The Flash” Season 4, Episode 1 aired on Tuesday, Oct. 10 on The CW.
Most South Africans will however only get to see Kim as The Mechanic in The Flash when it airs on MNet 101 in January 2018.

WATCH: The Official Trailer of The Flash Season Four

More in this category: « Davy's Fire - The Film & The Story Behind It Aunty Merle, The Musical - A Cape Town Festive Season Treat »
back to top