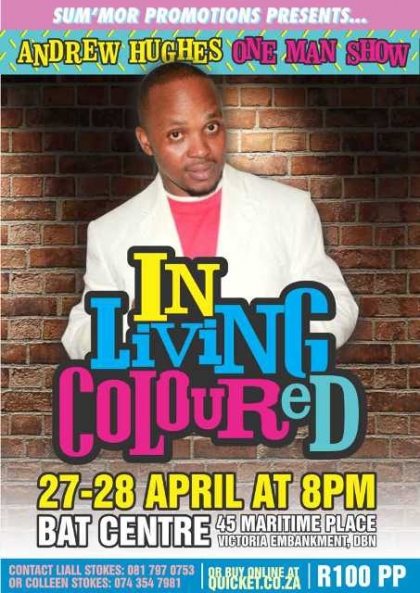 It's barely been two years since Durban's Andrew Hughes entered the comedy scene and he's been accumulating a snowballing success rate along the way.
Now he's about to take that major proverbial "first step" by showcasing his debut one man show In Living Colour(ed)!

Hughes entered the comedy scene in 2016 and barely a year later, he was nominated in the Newcomer Category of the Comics Choice Awards 2017 which is considered the Oscar's of South African comedy.
In 2017 he was also invited to tour Johanesburg and Swaziland with his mentor the renowned comedian Carvin Goldstone and to date Hughes has shared the stage with a host of SA comedy heavyweights - Joey Rasdien, Kagiso Lediga, Marc Lottering and Donovan and Jason Goliath Goliath to name just a few.
These are no easy fetes for a young comedian in a highly competitive industry.

The 33 year old Hughes born in bron in Ixopo KZN is now ready to stage his debut one man show, In Living Colour(ed).
"The name of my show is inspired from a comedy series entitled In Living Colour which used to air on TV in the early 90s and starred comedians like Keenan Wayans and Jim Carey. I then decided to use the word "Colour(ed)" and brighten it up using different colours all in a bid to show that the show is applicable to people of all "colours" and racial backgrounds," he explained.

"I've also called it In Living Colour(ed) because I am coloured but I look Black. There are Coloured people who look Indian and some look White as well... We come from different backgrounds and have amazing stories to tell. In Living Colour(ed) is partly a celebration of my story on stage. The show will incorporate a lot of storytelling about growing up Coloured and as a South African as well. It will also touch on themes like relationships and the colourful shenanigans in South African Parliament and politics among other universal topics. The aim is to tell stories that we can all relate to regardless of racial background or age," said Hughes.

Explaining where his passion for stand up comedy began, he said it was back in 2011 while he and a friend watched a "Proudly Coloured Comedy Show" DVD, Hughes then started going to comedy clubs to watch just to get "a feel if it". "My friends always found me very entertaining at family functions and always recommended I try it out, but I was very intimidated by being on stage with other experienced acts. In May 2016 Carvin Goldstone launched a show titled The Next Generation Comedy Series and the show was aimed at giving newcomers a chance to be on stage and be recognised. That was where I made my mark as a comedian. After that I started getting booked by comedy promoters in Durban and my comedy just kept improving," he said.
Describing his style of comedy, he said it's a mix of witty punchlines with story telling. "I also include some impersonations and a bit of dancing as well," he laughed.

Be sure not to miss all the action on stage with Hughes in In Living Colour(ed). The show stages on 27 & 28 April at The Bat Centre, Wilsons Wharf, Durban at 8pm. Tickets are R100 via Quicket.co.za and at the door. This is a clean comedy show and suitable for all ages.
Tweet