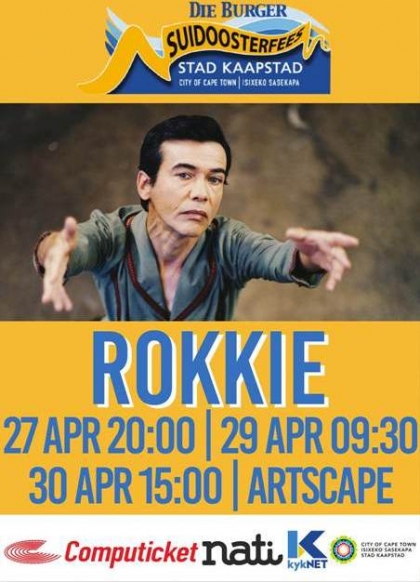 Equally ridiculed and celebrated in our communities for their perceived flamboyance, while also in many straight circles accepted with a bit of confused caution, almost everyone on the Cape Flats knows someone who is stereotypically described as a "Kaapse Moffie" but seldom the stories of transgender persons are told from the point of view of and as the main character in a theatrical play.
The transgender persons in most theatre works are usually cast as secondary characters and many times as comic relief, but the plays usually do not revolve around them.

Featuring Charlton George as the main character and directed by Lee-Ann van Rooi, Rokkie is the story of a 50-year-old transgender person on the Cape flats.

Originally performed as a community theatre piece in early 2017, Rokkie is now taken to a next level as one of the featured plays at Suidoosterfees. The evolotion of Rokkie from the small community theatre stage to Suidooster at the Artscape benefitted from having experienced theatre professional Hennie van Greunen and Ilse Oppelt on board in an advisory capacity.

The writer Khoe Activist Denver Breda told bruinou.com that Rokkie is not based on his own personal experiences as he is not transgender but the story gets its authenticity from the personal experiences and life stories of transgender friends and acquaintances.
"The day which she has been waiting for, has arrived; her gender re-assignment surgery. With the opening scene, we see her dressed in her lingerie, sitting behind a sewing machine, stitching a dress while enjoying a Black Label beer and a cigarette. She shares with her audience some of her most intimate memories; her parents, her mother's boyfriend, the love of her life, her first beauty pageant, time spent on the street and her quest to find her identity."
"Rokkie is a sad story yet full of hope. No matter how tragic life is, there is always a glimmer of hope."

We can vouch that Denver who self-published his short story Boesman Myt in late 2016 and has since penned a collection of other short stories has the ability to immerse his readers and audiences in the lives of the charachters he explores.
Click Here to Read our Review and find out how to get a copy of Boesman Myt

Predominantly in Afrikaans, Rokkie also has some sprinklings of Gayle / Gail thrown in and even a few Khoekhoegowab words in the dialogue but Denver Breda assures us that those who do not understand gay urban slang or who do not know any Khoe words will not be entirely lost as the contexts of those dialogue aim to clarrify the "unusual" words for the audience.