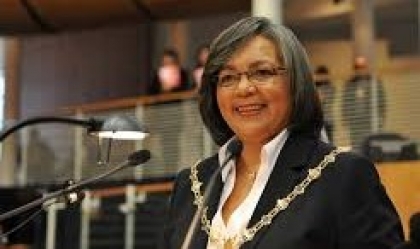 Cape Town mayor Patricia de Lille had until 3pm on Wednesday to submit reasons why the decision to remove her from her position as mayor should not be carried through by the Democratic Alliance Federal Executive. Patricia de Lille proceeded on Wednesday to file representations with her own party's highest office as she sought to save her job.
Last week‚ the DA's caucus in the City of Cape Town effectively ousted De Lille in a vote of no confidence - but the decision needed to be ratified by the party's federal executive before it took effect. This followed after the party implemented a clause that‚ essentially‚ allowed it to remove office bearers internally.
It appears as if she has little hope for an outcome in her favour.
Patricia de Lille indicated in last week that she is ready to take her fight to the next level and it now clearly seems like the courts is where it will be heading.
The DA may have just painted themselves into a neat little corner.


With all of Aunty Patty's flaws and the love-hate affair some Capetonians have with her, Cape Town voters will not easily accept whoever the DA tries to put up as the new mayor and the DA also cannot afford to have De Lille on the outside as a member of another party as she has more than enough ammo to fight against them in an election.
On the other hand, should the DA FedEx decide to overrule the "recall" and retain her as mayor, they will in effect be admitting to the string of allegations of DA corruption which have surfaced as they were trying to tar and feather De Lille, .
Politically the DA is caught between a rock and a hard place. They are dammed if they let her go and they are dammed if they keep her and confirm that they are internally corrupt.