Mayor de Lille Resigns - What is Next for the People of Cape Town? Featured 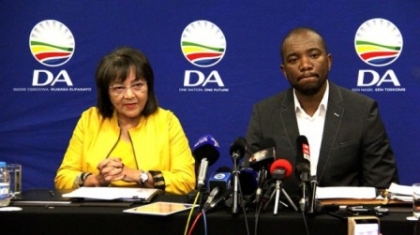 Now that Cape Town Mayor Patricia De Lille has resigned from her position effective 31 October 2018 and her party the Democratic Alliance (DA) has withdrawn internal charges against her, the big question is what can the people of Cape Town expect?
For the citizens this is akin to your partner breaking up with you but giving you three months notice to allow you to find a new partner and even promising to help your new partner settle into the relationship except... You don't get to say who your new partner will be. That is up to the family of your soon to be ex partner who have all been pushing for this breakup...
They will now give you a new partner who they as a family will decide is best for you...
We ask what is next for the people of Cape Town as the city will be getting a new mayor for the next three years appointed by the DA; somone who the citizens did not directly vote for.
It is very much like currently South Africa (for a second time) is run by a new president (Cyril Ramaphosa replacing Jacob Zuma) appointed mid-term by the ruling party, the African National Congress (ANC) and who South African citizens did not originally vote for....
What now for the city?
Extract from a News24 article here--> De Lille resignation: Charges dropped. What now?
De Lille will continue to serve in her capacity as mayor for the next three months until October 31, and will remain a member of the party.
She has not decided what lies ahead for her from November onwards, and couldn't say whether she would stay on as a normal councillor, but was open to helping with a transition of power.
De Lille remained committed to investing whatever little time she had left to complete the project of "building a better city" and contributing towards the transformation of Cape Town.
Included in this was continuing the city's housing project and dealing with the issue of land in the urban areas. General city business will continue as usual.

Maimane said during the briefing that there is a process that unfolds when electing a new mayor, and that will be respected.
Candidates will be put forward and interviewed ahead of the proposed November 1 start-date, he said.
"This has been a long and difficult journey. This matter has already gone on for too long, and has sapped the energies and attentions of both parties from our core work, for which we apologise," Maimane said.
"We were both desirous of finding a mutually agreeable resolution, and we have now done so. I am confident that this outcome is in the best interests of the people of Cape Town."
He also said he was pleased that the deal allows De Lille to remain a member of the DA, and he had always had respect for her calibre and her record in the city.
So what do we say?
We at Bruinou.com can’t help but wonder in which direction the next mayor will lean...
Will it be someone with their own vision for the city, a vision that aims to benefit all of its citizens? Will the new mayor act in the interest of the poor?
Will it be someone who puts the people first or will it be someone who blindly tows the party line?
Will it be someone appointed simply to be the Cape Town face of the DA’s 2019 election campaign albeit that the 2019 elections are actually Only for National and Provincial parliaments?
All the names touted since De Lille's head has been on the chopping for almost a year now have been of counhcillors (like the current deputy mayor) which the citizens se as problematic but...
The DA in all likelihood has already made up their minds who their choice for the next mayor will be. We think that no matter who they appoint, that person most probably will only be someone who can be  controlled by their top brass and who will maintaining the status quo but will not bring any drastic new changes.
The DA can no longer afford to see "the Coloured vote” as automatically theirs.
Should they make the mistake of appointing someone who offends the already often misplaced sensibilities of their voter base, it will spell disaster for their future election plans in Cape Town and most likely also the Western Cape province.
WATCH: Mayor de Lille Resigns - What is Next for the People of Cape Town?
Tweet

0 0
Published in In the news