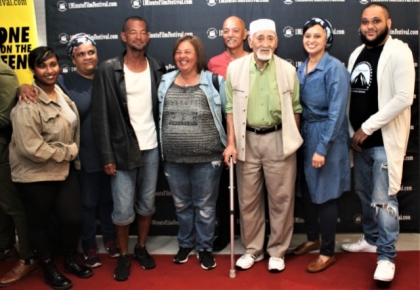 A new documentary about how harmful industrial fishing is destroying fishing communities in the Western Cape took the runner-up award at the International 1-Minute Film Festival in Cape Town last week.

The online documentary by Greenpeace, called GUTTED: THE FIGHT OF KALK BAY FISHERS, focuses on the Kalk Bay fishing community. It explores how laws favouring the industrialisation of fishing in South Africa have not only changed the socioeconomic situation of these communities, but also, the once vibrant and community-centric culture.

“People are always perplexed by what is happening on the Cape Flats, but what they never seem to understand is how so much of deterioration is due to systemic issues that start at the top,” said documentary producer Angelo C Louw, who is currently shortlisted for the TYI 100, a list of Africa’s most influential youth.

“What is clear is that people are losing their birthright due to unfair laws that are preventing them from carrying on their age-old tradition - causing unemployment and stripping away the communities’ means to sustain themselves,” he said.

“They say you mustn’t lose your culture; but the way that things have gone, they’ve taken Kalk Bay’s culture away. They took away fishing,” said Moegamat Alie Fortune, an 85-year-old, fourth-generation fishermen from Kalk Bay.

Ferial Davids, who cleans fish at the Kalk Bay fish market, said that there has been a drastic decline in the number of fish local fishers are bringing in. She suspects that it is a result of trawling along the Western Cape coastline.

“It’s not a lot of fish around now lately. I suppose it’s because of the big trawlers that are around. There used to be hundreds and hundreds of snoeks here on the harbour; but nowadays, it’s like ten snoek, 20 snoek, not even a hundred snoek for the day,” she said.

GUTTED: THE FIGHT OF KALK BAY FISHERS explores the trickle-down effect of harmful industrial fishing, which has led to many of these coastal communities having to engage in illegal fishing activities because they do not have permits to fish legally. This had tainted perceptions of local fishers, swaying local support, and further marginalising them.

“You will find that over a period of 30 years, the community is involved in these illegal activities, and they are criminalised based on the law that does not allow them to access the [fish] in the area that they are living in,” said Professor Moenieba Isaacs, Academic Coordinator at the Institute for Poverty, Land and Agrarian Studies at the University of the Western Cape.

The documentary, which is available on Greenpeace Africa’s YouTube channel, is the first of a series of short documentaries that the organisation has produced in the build up to its ship, the Arctic Sunrise, docking in Cape Town. The ship’s arrival in South Africa is part of the organisation’s international ocean sanctuaries campaign, urging the United Nations to protect a third of the world’s oceans.

More in this category: « Zebro’s to Implement Sensitivity Training after Incident with Mom and Autistic Child
back to top