The Boy with the Buttons at the Bus-stop Featured 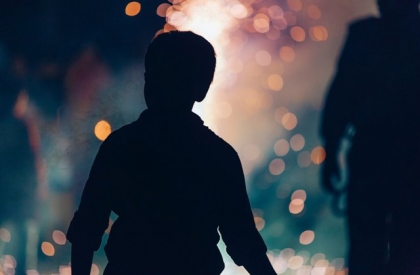 I was huddled at the bus stop, partially sheltered from the South-Easter’s icy fingers, as it fiddled at the crevice of my coat and pinched my cheeks playfully. Ominous clouds hung overhead, heavily pregnant with rain, an imminent birth soon to be unburdened from the heavens.

He appeared as if from nowhere, his expression as innocent as his clothes were threadbare. Dirty blue jeans, scuffed sneakers and a cotton sweater with the buttons done up wrong were his body’s only defence against the elements.

He was a slight figure, small and serene as he politely phrased his simple request. “Aunty, can you help me with my buttons…my buttons please?” He spoke softly and rapidly, the words tumbling out in a torrent of repetition, as he sniffed despondently. “I do my buttons but I can’t do it, the buttons aren’t right…” I noticed that his eyes were small and wide set and his manner of speech was distinctly child-like, making him appear even younger than my guess of 12 years old. I felt a rush of pity for this forlorn, shivering little boy, who possibly had a cognitive disability of some sort, coupled with obvious poverty and neglect. “Ok, let me help you.” I reached out, re-buttoned his sweater and straightened his collar. He smiled sweetly, thanking me just as the bus arrived.

I was moved to tears by this encounter. It evoked a plethora of un-named emotion inside me. Perhaps it was the trusting way in which he asked for assistance, or the fact that his circumstances seemed so cruel. Why could no one else have helped him with what seemed like a menial task? He could not dress himself properly, as buttons gave him difficulty. Why was he not in school at 11am in the morning? These questions plagued me on my journey to work, and I hoped he was going to be ok, as there was no time to engage him in further conversation.

Over the next year or so, I encountered him a few more times. I would be walking home from the bus-stop, or on the way to the corner shop, and he would always appear as if from nowhere in particular, matching my steps and chattering away in that consistently monotonous way of his.

These chance meetings never really bothered me. He was a harmless child who posed no physical threat to me. All he craved was a smidgeon of attention, if only for a few minutes, from someone who had been kind to him. I would make polite conversation with him, asking the occasional question and allowing him to walk beside me, always managing to successfully steer the exchange into a suitable conclusion, with a friendly but firm goodbye before arriving home.

Sometimes his rambling would continue even after I started responding in monosyllables, throwing in an “uhuh” and a hmmm” then growing silent after a while. “ Hello Aunty, where you going? I’m just walking around, my buttons aren’t right… I’m walking back to Manenberg… Can I come visit you? Where you going?? I like you… Can’t you fix my buttons for me… I’m bored, there’s nothing to do… It’s a nice day hey… Where you going? Can I come with you….” And so forth.

A good few months passed by before I saw him again. He had under-gone a physical transformation that is unique to the rapidly developing adolescent male, which seemingly happens overnight. Gone was the skinny shrimp of a boy who first beseeched me for assistance, his woebegone face reflecting the wind and wet of that first, fateful day. His shoulders had broadened out, emphasizing arms chorded with small, sinewy muscle. A fuzz of hair had sprouted sporadically on his upper lip. He had grown a great deal too, so he was much taller than my tiny 1.43m now. What had not changed was his mental demeanour, as he once again asked me to button him up properly.

This time, for the first time, I was hesitant. A primary sense of self protection had kicked in, curbing my helpful tendencies even as I was not fully conscious of this withdrawal. I politely told him I could not help this time, and continued walking on. His confusion was wholly apparent as his sparse brows knitted into a frown, contemplating this rejection.

“Aunty, but you always help me, you help me with my buttons….my buttons aren’t right….” As he started following me up the road. I was still polite but quickened my pace as I refused once more, in two minds now as I assessed the situation. Why was I being mean? Why did I instinctively feel threatened, somehow, now that he was older, at least in his physical form. I felt slightly guilty but stifled the feeling almost immediately, as I left the troubled man-child in the road. On two more occasions, the same scenario played itself out, with the occasional and alarming profane word or two being muttered darkly as I made a swift getaway. I always felt a sense of relief at these times, my twinge of conscience buried beneath much more important thoughts and feelings.

The turning point came on one bright and beautiful mid-morning day, as I made my way down the quiet stretch of road towards the bus-stop. I was thinking about nothing in particular, as I enjoyed the slow-heating hand of the sun on my face.

I saw him as I crossed the road, coming toward me.
He was walking with a swagger and his eyes threw daggers at me.

“You rude, you never want to help me with my buttons…. I always ask you… I always ask you… you $#%&A!” This time I felt genuinely alarmed and started walking faster, as I told him to leave me alone, as there was no-one in sight. He decided to walk past me, only to turn around and slap me on my bottom, nastily laughing, knowing that nobody was there to witness his misdeed.

Sometimes, a spilt-second moment slow-motions into a singular, life-altering span. The day’s ordinary silence deepened into a sudden recognition of a figurative death of sorts. As my buttocks burned, as expletives escaped my mouth in a paroxysm of surprised rage, I was able to fully understand, for the first time, the very reason for my fear-infused behaviour that drove me to disengage. I had sensed something, intuitively grasped the nature of his becoming, as all women are alerted to this state of knowing. It saddened and repelled me. I was aware of my vulnerability as he was aware of his “power,” colliding in that solid, horrid stinging sensation. It was a low point of profound magnitude.

Ironically, the last time I saw him was at the police-station. I was there to report a stolen phone and he was loitering around at the entrance. The day mirrored our first meeting – grey and austere. I was not in the best of spaces, as I had been mugged and making the trip to the station was a necessary nuisance. When he saw me, he started cursing under his breath, issuing threats but making no attempt to follow me. I ignored him and soldiered on, head down and feet moving furiously. Once inside, I turned around and saw that he had taken off, leaving me with a feeling of relief and lingering anger.

Sometimes, I remember that innocent child who evoked pity and a human desire to literally lend a helping hand. There are times that I wonder…should I have swallowed my caution and continued to be that helping hand? Perhaps if I had, his hand would not have imprinted temporary pain and a permanent, irretrievable sense of being violated into my psyche. Who knows...

I never saw him again.

More in this category: « Daai dom skelm Jack het ôs dom kô maak. That Plant In The Garden of Angles Where Angels Fear to Tread »
back to top