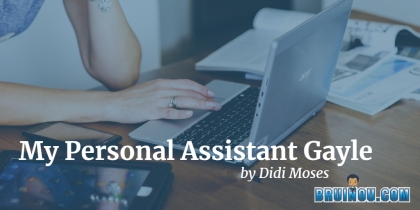 Many years ago, I had an assistant named Gayle!
She had her own email address; she booked all of my appointments, kept a diary of to-do stuff, helped me organize the office, you know? Personal Assistant stuff!

Clients loved Gayle. She’d sometimes have a wee gossip with a client about me, a giggle over my idiosyncrasies, pacifying a client when they were a bit pissed off at me; basically, she cleaned up all of my mess.

One night I was out to drinks with a friend and he asked, (because he’d also had email correspondence with Gayle), ‘What is Gayle’s last name?"

And I said: "Gayle is her last name".
He said "Oh, what’s her first name then?" and I said Sheila.

Now only a few people ever really got that, because you see, Gayle wasn’t a real person. Gayle was me.
I was my own assistant for 2 years.

Gayle was the best assistant I’ve ever had, but it was strange to handle stuff as someone else.
it was however great that I could avoid so many things by having a pretend assistant.
I just hope having a fake assistant dealing with a client, isn’t illegal... Is it?

Oh, and the term ‘fake it till you make it’ is at times pretty darn Sheila, but it's also pretty true!

Didi Moses is a Professional Choreographer & Creative who runs a Casting Agency based in Woodstock Cape Town.

If after reading this you are still clueless about the real meaning behind the story of Didi & Sheila Gayle, check out the artice Gayle, the language of laughter – and of safety or...

WATCH: Gayle, The Language of Laughter – and of Safety

Gayle, The Language of Laughter – and of Safety M&G
More in this category: « Eezo The Blind DJ Has a Great Vision