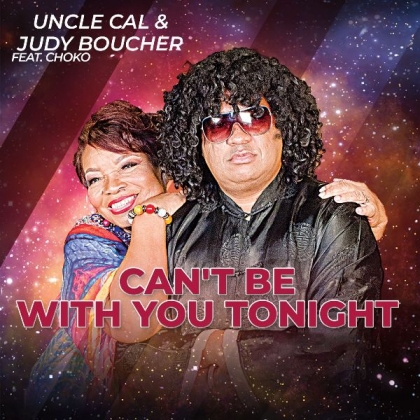 Caribbean songstress Judy Boucher has teamed up with Cape Town's very own Afro Ninja DJ Uncle Cal for a remake of her classic hit song Can't Be WIth You Tonight.
Judy Boucher is still a perennial favourite among South African music lovers and audiences since the early 1980's and has for a long time been a regular visitor to our shores, sometimes just for a little holiday but more recently with sold-out shows in Cape Town where she still has a massive fan base who we are sure will love this new take on her classic hit along with all her other fans all around the world.

The newly released dancehall version of Can't Be With You Tonight is by no means an off-the-shelf remix of the old original recording from the 80's.
The whole entire new version was recorded from scratch with Judy Boucher & Choko laying down fresh vocals for Uncle Cal right here in Souh Africa and now you can listen to it and buy it right here in our Bruinou.com article.

Uncle Cal & Judy Boucher - Can't Be With You Tonight ft. Choko is Now Available on Most Major Music Platforms

DJ Uncle Cal has recycled the timeless Judy Boucher ballad, Can’t Be With You Tonight and transformed it into a mid-tempo EDM and Dancehall smash!

Songbird, Judy Boucher, needs no introduction and has garnered up a string of hits and millions of fans across the world since breaking out onto the music scene in the 70’s

Can’t Be With You Tonight is an iconic classic track and probably one of her most popular songs. It was an instant favourite since its initial release in the late 80’s and has remained a festive anthem annually since then. The revised version is bound to introduce and expand its horizons to a wider audience.

Judy says she had been approached to do a remix of the song on numerous occasions in the past but never found it appealing until Uncle Cal presented his idea to her.

The quintessential afro ninja DJ who is identifiable by his curly Afro, ninja Kung Fu outfits and space age sunglasses has been around for quite a while but has rapidly been developing his production skills.

He recently released a self penned song with songstress, Vuva Kumalo, which is doing well all across the globe thanks to social media platforms.

The versatile DJ has also remixed and reproduced songs for the likes of South African artists such as Dr Victor, RJ Benjamin, and saxophone virtuoso, Donveno Prins.

He says....”My idea of a remix for this particular song had been coming on for the past six years but Judy’s schedule and mine kept clashing so we could never find the time to chat about it.”

The opportunity finally presented itself at the end of 2018 when Judy came to South Africa for a series of shows and concerts over the festive period.

After her hectic itinerary they met at a coffee shop where she listened to the basic idea from his cell phone and took an instant liking to it. At that meeting he also introduced her to another native Caribbean artist from Trinidad & Tobago by the name of Choko who was in the country on a visit.

They formalised the idea and Choko was included to do the Dancehall rap parts giving the song an authentic Caribbean feel.

Within that week they went into the studio to lay down the vocals for the revised version.

Judy subsequently left for the UK and presented Uncle Cal with a signed copy of her autobiography called With You Tonight on her departure.

Over the past year his busy schedule once again impacted on his studio work and he put the project on the backburner to concentrate on his live performances.

However when Covid-19 reared its ugly head in March of 2020 and rendered the world into lockdown, he took time out to catch up on his reading and by chance picked up Judy’s book which inspired him to expedite the final process of the remix.

When Judy Boucher left South Africa at the beginning of 2019 after finishing a string of shows and recording her fresh vocals for the new arrangement of Can’t Be with You Tonight, she had never heard or listened to the final product until now.

She was blown away and very pleased with the manner in which the integrity of the song was maintained.

Her exclamation on hearing the final mix was ”I am loving this! I didn’t imagine in my whole life it was going to be this fantastic. Really beautiful, it’s absolutely amazing!”

Can’t Be With You Tonight (Millennium Mix) is now available on most online platforms such as ITunes, Google Play, Spotify, Deezer etc

More in this category: « The Music, The Dance, What is Cape Jazz? - Ghoema Woema on VIA TV