Kroes-control - Can SWIRL entertain while raising some hairy issues? Featured

Naturally we were quite excited that for the first time ever a fictional film has been made about the topic and just going on the amazing talent that is behind the film, it meant that this would more than likely be worthwhile watching.
The cast includes Chanelle Davids, Vinette Ebrahim, Shaleen Surtie Richards, Ilse Klink, Bianca Flanders, Basil Appollis, Maurice Carpede, Veronique Jepthas, Khadija Heeger, Gerwen Simon, Celeste Matthew-Wannenburgh and Aisha Nel.

You can check out the trailler video further down, but lees gou aan hiesô.

South Africa's Coloured people most likely have the world’s widest range of hair textures and with that comes a whole range of issues, prejudices and stigmas, many of which were indoctrinated into our collective psyche. Ek mean manet, Apartheid se Pencil Test was nie so lank terug nie...

Just to be clear though, if you are looking for something that is serious and meticulous in its approach to the subject, then this film might cause you to start scratching your scalp a bit.
Moenie... Jou hare gaan uitval.

Still, it is about a serious issue and we for starters could not quite wrap our heads around the way the tagline of the film is pitched. For some people we spoke to i seems to imply a level of complete representivity.

We know exactly where in the movie it was mentioned and the context thereof but even with one of the characters later on alluding to the letter, it still doesn’t quite explain how SWIRL could be pitched as "A Letter to Hair on The Cape Flats".
Waa' pas daai?

Perhaps it could have had a more personalised or individualised tagline with reference to the the lead character?
Perhaps it should not have roped in the "Cape Flats" as a synonym for Coloured?

We’ve indeed heard a few objections from friends who also watched the film. Their view is that the “hair types” dealt with in the film represent only a portion of Coloured women, particularly on the Cape Flats.
Also, bar the accents, any film about Coloured women’s hair stories could just as well have played out in Eldorado Park, Eersterust or Gelvandale. Granted that there probably isn’t likely to be a Coloured-owned “Hair Academy” in any of those places, the topic isn’t confined to the Cape Flats.
Those niggles are however not deal-breakers.

To be fair... Maybe Coloured people have for too long been the subject of documentaries or our stories are too often told in stereotype form by others in a way that irks us. Now when one of our own tells their story from their own perspective, we don’t simply see it as their story and we end up unfairly expecting them to fully represent “All of Us”.

The reality is that in its entirety, the film should be seen for what it is; Entertainment, a light-viewing comedy about an individual's perspective on a serious issue. It definitely is not a documentary nor is it based on one particular true story that would need complete accuracy.

Any comedy about a serious issue, especially one that often sorely touches a nerve with Coloureds is bound to draw criticism from at least a few quarters and often that criticism is not unfounded.
We suggest just a tiny pinch of salt.

Adams describes her own hair in various facets.
“My hair is my politics, my feminism, my fashion, my vanity, my defiance, my identity, my defense; it’s my everything and my nothing in particular… It’s complicated!”
“But these stories need to be told and this is just one. I really hope that it starts conversations,” she adds. 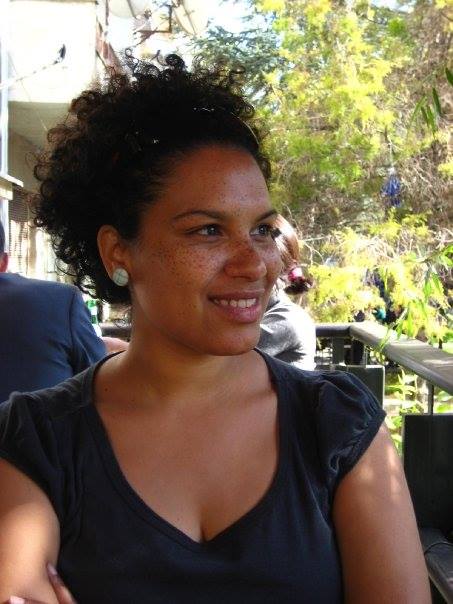 Motivated by her frustrations with her own hair at an early age, Elaine (Chanelle Davids) sets about building for herself what ultimately becomes an illustrious career doing for others what she had to do unto herself – keep your hair in submission.

Quanita is of course ecstatic aboutt the stellar cast she could assemble to work on her film and especially the legendary ones like Vinette Ebrahim, Shaleen Surtie Richards and Ilse Klink who are constant favourites among South Arican audiences .
“The cast and the crew are incredible. And what an honour to have the opportunity to work with stellar actors and legends! People that I have grown up with and who I look up to. When. approached, all the actors couldn’t wait to share their own hairs journeys. We all carry a bit of ourselves on this movie,”

Notably Adams also sings the theme song, She’s a Girl, which was written especially for her by her friend Dr. Marc Hendricks.
Adams also expressed her thanks and appreciation to Amanda Carpede from Cape Town Naturally for her advice and support.

It's a complicated issue yes, but unlike the way it seems to be pitched, the actual storyline does not pretend to be complicated.
We just see it as a fictionalized, simplified and generalized lighthearted exploration of many (but far from all) of the much more serious, complexed and layered issues around hair in our community.

If it was made any more serious and if it was too nuanced about making sure everything is a perfect reflection of reality, and if it was pedantic about all hair types being represented, then it would have possibly no longer be any bit entertaining.

Don't try to see it as "a lesson in Coloured hair" or as a definitive statement on what Coloured women should or should not be doing with their hair.
Yes, Coloured women's hair is a serious issue; but with all of its comedic situations SWIRL was certainly not intended to be a serious film.

If you allow yourself to not take the film or yourself too seriously when watching it, we reckon you will probably agree with us...

SWIRL really is just a nice lighthearted entertaining film about someone dealing with issues that many of us can relate to.